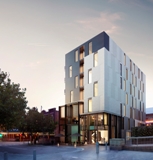 The creators of Little Creatures beer have started building a boutique hotel in Perth, due for completion early next year.

The business partners behind the new Alex Hotel is a consortium of Little Creatures founders – Howard Cearns, David Martin, Nic Trimboli, Adrian Fini and Miles Hull who are calling themselves Cicero Project for the venture – named after the Roman Emperor who was a philosopher and brought about cultural change.

The 74-room hotel located on James Street is situated on the edge of Perth’s CBD near the suburb of Northbridge. Hull, who was general manager of Little Creatures at startup and later the company’s marketing manager before the business was sold to Lion, will be the general manager of the new hotel.

“Each of us have had a long standing love of hotels and see an opportunity to introduce some fresh thinking to the industry, a bit like we did with Little Creatures years ago,” said Hull. “We see an opportunity for hotels that are independently minded and celebrate the true craft of hospitality, but deliver them with creative and modern thinking. We’re yet to get Alex up and running, so we’ll see where we go there after.”

When asked if beer would be a feature of the hotel, Hull responded, “there is no room for a brewery in the hotel, but we will have lots of good craft beer available. The reception and lobby will feel like a great wine bar or cosy cafe. It will be the exact opposite of lobby of yesteryear that has more in common with an airport waiting lounge. The hotel will also have a rooftop terrace with a garden and great views of the city.”