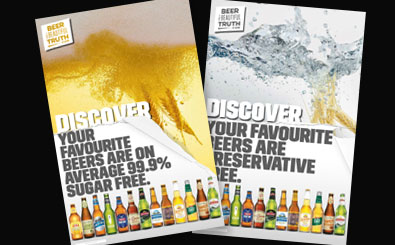 Lion’s managing director James Brindley has hit back at the Foundation for Alcohol Research and Education (FARE) after it threatened to take Lion to the ACCC over its Beer: The Beautiful Truth Campaign.

FARE told Lion to “cease and desist” with the campaign, which it said “promotes the idea that beer is somehow healthy”.

Brindley responded by saying that while the two organisations will not always see eye-to-eye, more could be done to improve Australia’s drinking culture through respectful consultation amongst all relevant stakeholders.

In his letter to FARE, Brindley said: “FARE’s approach is all the more disappointing given the organisation was established by Federal Parliament, with our support, to dispense an over-collection of tax from beer drinkers that never met with the necessary Parliamentary approval.

“I think the members of the public that paid that tax will be disappointed to see their money wasted on frivolous publicity stunts rather than directed to programs that address alcohol misuse, as per the original intention.”

In responding to FARE’s accusations that the Beer: The Beautiful Truth campaign “misleads consumers to perceive that beer has health benefits that it does not possess”, Brindley said: “Beer the Beautiful Truth is focused on busting common beer myths and providing all of the facts in a clear and transparent manner. Through our own consumer research we know there is considerable confusion about what is in beer – while people clearly understand it contains alcohol, most think it is full of sugar and preservatives, which is simply not the case.

“By providing the facts we hope that people will be better informed and reconsider beer when making their choice in bottle shops and at the bar.

He added: “FARE has suggested our campaign is about convincing non-regular drinkers to become regular beer drinkers, or encouraging someone wanting to stop drinking for health reasons to continue. To the contrary, Beer the Beautiful Truth aims to encourage those people who choose to drink to reconsider beer as an option when they do so.

“They also suggest that the use of language such as ‘99.9 per cent sugar free’ or ‘preservative free’ is positioning beer as healthy. These are merely basic statements of fact about aspects of the nutrition content of beer – no health claim or effect on the body are mentioned.”

Brindley also said that more than 70 per cent of consumers have told Lion that the voluntary addition of nutritional information panels to its labels will help them make more informed choices when drinking. These choices include choosing a lower calorie option, drinking less overall or drinking fewer drinks on one occasion, Brindley added: “Surely this is something FARE should welcome?”.

Brindley concluded by saying: “At a time when data from the Australian Government shows we are making considerable gains in reducing underage drinking and risky drinking generally we have encouraged FARE to focus its significant resources on targeted, value-adding activities that will further improve our drinking culture rather than pursuing measures that penalise the broader population without reducing harm.”