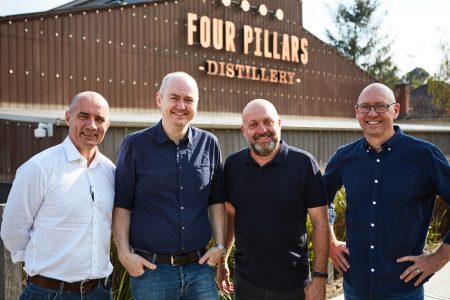 Lion and craft gin producer Four Pillars have announced a deal which sees Lion buying a 50 per cent stake in the Four Pillars business.

Four Pillars was established in 2013 by Stuart Gregor, Cameron Mackenzie and Matt Jones. Gregor told Beer & Brewer that the decision to sell came after a number of entities had approached Four Pillars looking to make an investment.

“We have, over the last 18 months, been approached by a lot of people,” Gregor said. “By that I mean private equity, wealthy individuals as well as trade partners and more than one trade partner has approached us.

“Lion just felt the best and I like the fact they are based in Australia. I was a bit afraid of us not being the number one gin in a portfolio, that we might get lost in a company with three or four other spirits brands or gins brands.

“The partnership with Four Pillars is really exciting for Lion, as we venture into new categories outside our core beer business,” Brindley said.

“What Matt, Cam and Stu have done in creating Four Pillars in just over five years is nothing short of remarkable and we want them to keep their hands on the wheel, while we offer advice, counsel and assistance.”

Lion’s craft credentials lie in its beer business which includes James Squire, Malt Shovel and Furphy. Little Creatures is also part of the portfolio and Lion adopted a similar strategy in buying that business, by making an initial investment, before buying the business outright in 2012.

“This is a very great day, not just for Four Pillars but for Australian craft distilling because finally everyone understands how good Aussie spirits can be and that a big business like Lion is interested enough to pay a fairly good amount of money for half of a pretty good spirits business.”