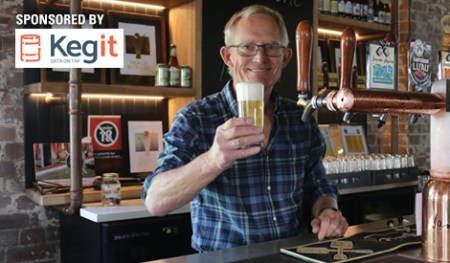 The winner of the inaugural Beer & Brewer Lifetime Achievement Award is the godfather of brewing himself, Chuck Hahn.

It’s been around 46 years since Hahn began working at the Coors brewery in his hometown of Colorado in the US.

In 1981 he came to Australia to work as the General Manager of Brewing for the Tooth and Co and Resch’s breweries. His task was to modernise brewing techniques and consolidate production processes.

“I came out here and it was quite a change for me compared to Colorado. All of a sudden I had 13 unions to deal with, any one of which could have shut down the brewery, but within a year and a half we had brought that down to two unions,” Hahn told Beer & Brewer.

“I had my life threatened and I had a couple of strikes and here I was a 35-year-old coming across to Australia, so it was a real eye opener for me, but it was a good introduction to the way some things were done.”

In 1983 Hahn wanted to start his own brewery so he went to Munich and tried to get the contract to brew Löwenbräu, which proved to be unsuccessful. So instead he moved to New Zealand to work as a consultant for Doug Myers who had just acquired six small Lion breweries.

By 1987, Hahn along with three venture capital partners, was able to get the financing he needed to build the Hahn Brewery, and in March of 1988 they went to market with Hahn Premium Lager.

“We were the first craft brewery of that size, but back then we didn’t call it ‘craft’ we called it ‘boutique’. And boutique beers made up less than one per cent of the market. Now craft by itself is about seven per cent of the total beer market. So it’s just amazing.”

At that time, the taxes on beer were excruciating and it was a struggle to keep the brewery going, “we just barely survived,” said Hahn.

“We were paying more than any of the large breweries because our cost of manufacture was higher so our wholesale price was higher. So we were paying the government more and it was at that point in time that we formed the Small Brewers Association of Australia with Willie Simpson and Blair Hayden, we were the three officers,” said Hahn.

In 1992, the Hahn Brewery was just barely breaking even and so Hahn went to the bank to try and broker a deal, but the bank said no and put the brewery into voluntary receivership. That’s when Lion Nathan came to the party and bought the brewery, keeping Hahn on as the Chief Brewer for the whole group.

From 1993 to 1998 Hahn helped to open two breweries in China, three new breweries in New Zealand and five in Australia and he was responsible for the beer quality across all of them, so he spent a lot of time travelling. But eventually he wanted to start making his own style of beer again, and that’s when he asked if he could start up a new brewery.

“I went to the CEO at the time and said I wanted to start the Camperdown Colonial Brewery [now Malt Shovel] and I said we were going to brew English style ales. He said ok and let me do it, but the condition was that I couldn’t lose more than $1 million in the first year. So I lost $960,000 in the first year, we broke even in the second year and we made a good profit in the third year, and we’ve just grown since then.

“We started very much as an independent craft brewery and back then it really wasn’t fashionable to do that. Then the GST came in early 2000 and that completely got rid of the heavy duty taxes and they also started introducing retail licences. So we were able to do some really innovative things, it was just amazing.”

“It’s never been just myself started up these places, it’s always a group effort and I’m just keeping everyone pointed in the right direction and with the right dedication,” said Hahn. “The dedication to innovate with distinctiveness plus consistent quality. And I think those two things, innovative distinctiveness and consistent quality is what we’re able to bring to the craft beer area that no one else is able to do.”

With so many milestones already under his belt, Hahn shows no signs of slowing down and says that we can expect to see more new breweries and innovative brews popping up under his watchful eye.

So from all of us here at Beer & Brewer it is with great pride that we offer the great Chuck Hahn the inaugural Lifetime Achievement Award.

The Lifetime Achievement Award was sponsored by: Kegit

Kegit provides craft breweries with an automated logistics and tracking platform, to ensure they always know where the beer is and that it’s being stored in the perfect conditions.

Kegit was created over a few pale ales and since then, the team has been busy building tracking devices and management software to help brewers, manage their business more efficiently.

Brewers can now see in real time that their kegs and brews are being looked after. The SmartTag provides a solution for a problem that craft brewers regularly struggle with, ensuring that venues and distributors are looking after their full kegs.

To read more about what Kegit can do for you, click here.