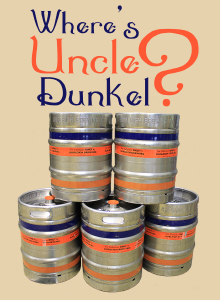 “Have you seen our Uncle?!?” is what Burleigh Brewing is crying after apparently having their entire batch of Uncle Dunkel vanish off the face of the earth. Brewed especially for the recent beer festival in Melbourne, the entirety of the 17 kegs (that’s two whole pallets of beer!) has evaporated, leaving not a single drop of the specialty brew for tasting – this is especially dire seeing festival rules dictated
that the beer could not be released to the public prior to the event.

Speaking to Peta from Burleigh Brewing, she expressed the desperation of the company as they try to track down their missing brew. “It has literally just vanished!” she said before explaining that the Local Taphouse boys never saw it arrive, yet it was signed for at several locations en route to it’s final destination, before seemingly disappearing into thin air.

With the brewing team “grasping at straws”, they decided to mount an email campaign this afternoon, hoping that one of their fans, somewhere, has spotted the nearly twenty-strong contingent of colourful kegs.

So we are calling on beer fans everywhere to help them retrieve their Uncle before it is too late. Any sightings of rogue beer kegs resembling the missing Burleigh property can be reported on their Facebook
page. After all Mr Dunkel is hard to miss, being about two
metres square, a metre high and weighing a tonne!

Report your sightings and spread the word via social media… and you might get a little sweetner – as well as a tonne of gratitude from the crew – as Burleigh are frantic to find their missing ‘family’ member. “We need our kegs back!” Peta said, before adding “I’m sure we can find a suitable reward!”

You heard her, get out your deer stalker hats and start sleuthing, beer fans!