By ashailer on May 25, 2016 in Beer & Breweries, Brewer Interviews, Breweries, QLD, Venues, Where to drink 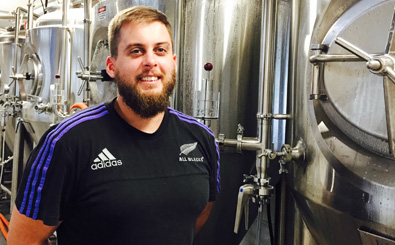 Jared Stewart has been appointed head brewer at Hemingway’s Brewery in Port Douglas, QLD, a waterfront microbrewery, bar and restaurant opening next month.

“While demand for craft beer has continued to grow and diversify in many countries over the past few years, the market is still in its infancy in Australia, so I am thrilled to take on this opportunity to engage both locals and visitors and share the beauty of what we are creating at Hemingway’s Brewery,” Stewart said.

“Working with our state-of-the-art microbrewery, I plan to let the creativity flow as freely as the amber liquid itself as we take on this mission to perfect a range of bespoke craft brews that Port Douglas can be proud to call their own.”

Stewart said Hemingway’s beers were made with just four key ingredients – yeast, the finest and freshest hops, base malts and the clear waters of Mossman Gorge – and were unfiltered, unpasteurised and preservative-free.

“Brewers within the craft beer industry are known for their passion and commitment to creating an ale that resonates with their fellow beer lovers who will savour the end product,” Stewart said.

“Compared to commercially manufactured brands, craft beers have a refreshing complexity of flavours and provide a healthier, fresher alternative.”

In line with the brewery’s philosophy to establish itself as an intrinsic part of Port Douglas’ identity, Stewart plans to engage with customers to gauge their preferences, as well as incorporate local produce during the brewing process.

“The microbrewery was developed from the ethos of taking the community with us on a journey through the brewing process, and to that end, customers are able to interact with the brewer through large windows and visible working tanks,” Stewart said.

“Customers can watch the magic happening and ask questions, while we will also be conducting regular tasting sessions where locals will have the chance to give their feedback on the beers.”

Each signature ale was developed and brewed in-house to reflect a particular aspect of the region’s past, ranging from the pioneering prospectors of the gold rush to the resilience shown in the wake of the devastating 1911 cyclone.

The launch range includes an IPA, Doug’s Courage, named for the way the town rebuilt after the tropical cyclones of 1911; while the signature pale ale, Pitchfork Betty’s, was inspired by Old Betty Whiting, a former local publican who was best known for brandishing an iron pitchfork against unruly patrons.

Construction of Hemingway’s Brewery began in August last year, with the much-anticipated two-level venue to incorporate a bar and restaurant over 850 square metres, including indoor and outdoor seating for at least 450 people, with spacious decks and views of the marina.