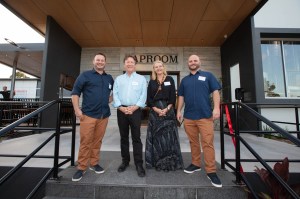 The brewery was founded by brothers Lance and Craig Masterton, and features a taproom that serves beer and food, and a production brewery that is weeks away from packaging beer.

The brothers intend to provide beer for the local market, but have plans to expand further afield as production grows. The first two beers – Japanese Lager and Summer Dusk Lager – will be made available in bottles in the coming weeks.

“We’ve decided to launch with two beers that we’ve been working on for some time,” says Lance Masterton, who has been the primary brewer for the business. “We really wanted to get them right before releasing them and the feedback so far has been amazing.”

“After nearly nine years in the making, it’s such an exciting time for us to entering into the next stage of our dream,” says Craig Masterton. “We’re really humbled by the show of support from the local community and the interest from the broader beer industry already.”

“This is a very significant venture for Lance and Craig,” adds Wellington. “Already they are employing more than 20 locals, and that figure will grow as production increases. The brothers are highly committed to product excellence, and so I expect Heads of Noosa to perform extremely well in the burgeoning craft beer market. Heads of Noosa is a great fit with the Noosa brand, and it will also help realise Council’s aim to diversify our local economy.”

The Heads of Noosa Taproom is now open every Friday, Saturday and Sunday from 11am.