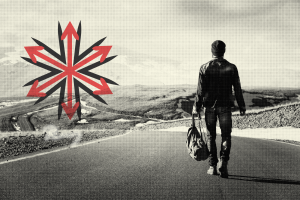 The beers in the range will be designed for drinking outdoors – at festivals and camping trips – and are the first canned beers to come out of the brewery.

“We spend a long time thinking about the provenance of beer coming from the valley – malt and hops and the brewing process,” says Simon Walkenhorst, founder of Hargreaves Hill. “But the reason we developed this new look was to play to a different crowd. It was really important for us to have something in the cans. It’s more about the great outdoors and wanderlust which is a bit of the spirit that it’s been imbued with.

“The Beat generation were aspirational about travel and the wide open road, and we thought it was a great direction to go in.”

In addition, Beatnik will be among the first beers in the world to use biodegradable six-pack rings. Made from waste grain from the brewing process, the rings are edible by wildlife and are an alternative to the commonly used single-plastic rings. Beatnik beers will also come in 100% recycled and unbleached cartons as part of the brewery’s commitment to zero landfill packaging.

“It’s been a bit of a challenge to get [the rings] here on time,” adds Walkenhorst. “We’re among the first breweries to use them – four in the US, one in South Africa and Urban Alley in Melbourne. It’s common sense. This is the thing that breweries will come towards. It makes perfect sense when you think about the damage that single use plastics actually do.”

The first Beatnik beer to be released is the XPA, which uses Galaxy, Mosaic and Amarillo hops, and pilsner, pale, vienna and wheat malts. It has a 5% ABV and a 28 IBU bitterness.

“I think we’ll be looking at a smaller family of beer,” says Walkenhorst. “We have six core products in Hargreaves, so we’ll have three or four in Beatnik. We really haven’t worked too much on that yet. We’ll be doing beers that we want to drink ourselves – that work in the right environment where cans can go, whether that’s camping or the great outdoors.”