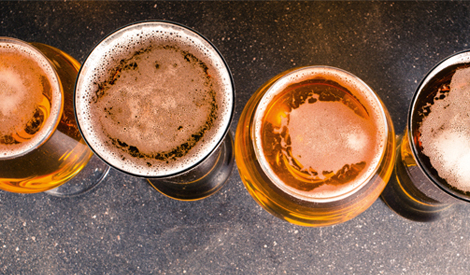 Luke Robertson takes a look at pale ales, Australia’s most consumed beer style according to a survey by Beer Cartel

In our Spring Issue, Luke Robertson from Ale of a Time looks at the incredibly diverse world of pale ales. Here is an excerpt from that feature…

What we think of as a modern pale ale can traced back to the invention of coke (coal heated in the absence of oxygen) just prior to the 18th century. Typically malt was dried over wood or peat fire, but coke allowed maltsters to dry the malt at lower temperatures and without smoke. The resulting malts were light in colour and imparted less flavour. The first beers labelled as ‘pale ale’ started appearing soon after.

In Australia the style comes in a few guises, with local hops giving brewers unique characters to work with while taking influence from overseas trends or classics that have survived the test of time. Tyson Addy from Boston Brewery in Denmark, Western Australia, believes the style is a good indicator of what to expect from a brewery.

“I always find that a pale ale is a good measure of the brewer’s intention. [It’s] a good starting point to know what the beers are going to be like. I can gauge things by that usually,” Addy explains.

The style has dominated the GABS Hottest 100 Beers poll the last few years, with the 2015 list featuring 28 pales, making it the most popular style. Many breweries around Australia also find their pale ale sales outstripping the rest of their portfolio. Pirate Life in South Australia, has enjoyed a lot of success in the form of consumer demand and industry medals for its core range, with its pale ale making up around 35 per cent of its production. Most recently the beer was awarded the trophy for Champion Pale Ale at the Craft Beer Industry Awards in July. Co-founder and brewer, Jared Proudfoot, says they want their pale ale to always be a flagship.

On a smaller scale is Smiling Samoyed in Myponga, South Australia. One half of the husband and wife brewing team, Simon Dunstone, believes their 12 Paws Pale Ale is the most popular beer at their brewpub. While in Sydney, Dave Padden of Akasha Brewing, says his Freshwater Pale is currently their biggest seller.

One of the biggest differences you’ll find across pale ales is their malt profile. While yeast and hop varieties allow for experimentation, brewers often use malt as a point of difference. Boston Brewery’s Rye Pale Ale has 15 per cent rye in its malt bill. The result is a counterbalancing spice to the citrus aromas and flavours. While at Pirate Life; making their pale ale darker and maltier than their other launch beers, a Session IPA and a Double IPA, was intentional.

“We wanted a pretty balanced pale ale with a lot of hop character. When we sat down we decided we wanted something a bit darker, a bit maltier and to use hops that support that,” Proudfoot says.

At the other end of the scale, Akasha has taken influence from the West Coast of the United States and built their Freshwater Pale Ale around a leaner malt profile. Padden chose this route to let the hops speak for themselves, rather than have them fight with the malt.

“In Australia, we tend to use a lot of crystal malts for some reason. So we backed the crystal right off –probably the same amount I would usually use in a pale ale but using a lighter grade. So you’re still getting the mouthfeel, still getting the head retention; just with none of that icky sweetness that you can get in pale ales that have a lot of crystal malt,” says Padden.

Hops play a big role in modern pale ales. With the influence the USA has had on Australian and global brewing over the last few decades; we are seeing more and more aroma hops being used. Customers increasingly expect strong hop aromas out of their pale ales. At Akasha, Padden uses a lot of hops during the whirlpool step of the brewing process, as well as a large dry hop addition.

“We wanted lots of those big piney, fruit-salady, typical Cascade flavours but we didn’t want too much bitterness,” says Padden.

However, as demand grows for hoppy beers, so does demand for hop varieties and many are proving harder to obtain. At Pirate Life, Proudfoot says he allows for one “headache” hop in each beer. In their Pale Ale it is Mosaic. A popular American grown hop, it is frequently mentioned as one that may be in limited supply in coming years. Proudfoot believes they will be ok until at least 2018. Boston Brewery also use it extensively in their Rye Pale Ale.

“On our scale, I guess I can cope with it but we are looking at putting that one in cans, so that may actually be something we have to really consider,” says Addy. He’s expecting the canning line to arrive by year’s end.

Local hop varieties also offer unique flavours for brewers wanting to help their beers stand out. Smiling Samoyed 12 Paws Pale Ale has evolved over the years but the brewing team still uses Australian grown Galaxy as the most prominent variety. Dunstone says it gives citrus and stone fruit aromas and flavours, while leaving the beer “crisp and clean and easy drinking.”

Simeon Bonetti, head brewer at Brisbane Brewing Co., uses Galaxy along with Vic Secret and some NZ grown hops in the form of Motueka.

“We didn’t have trouble getting Australian hops but we were trying to introduce people to a more fruity beer and expand people’s idea of what is possible with a pale ale. We weren’t getting it via the Australian hops that we had access to,” explains Bonetti.

Brisbane Brewing Co. also utilise a ‘hopback’, which is a piece of equipment that allows them to run their beer through a layer of hops at the end of the boiling process.

“It adds quite a resiny boost to the mouthfeel. I’m really happy with that, as it’s quite a light ABV so it drinks a bit bigger,” he says.

With so much variation between each brewery’s approach, the style can be confusing for consumers, and even brewers. Recently Feral Brewing from Western Australia made a small nod to the sometimes fine line between India pale ale and pale ale by crossing out the ‘India’ on the label of their flagship beer, Hop Hog.

Styles such as English bitter, golden ale and kölsch are all technically ‘pale ales’, and some may be indistinguishable from a beer labelled as one. Sometimes the name may simply be down to the brewer’s intent and influence when developing the beer.

At Pirate Life, Proudfoot admits theirs pale ale might not be completely true to style when it comes to some guidelines but given they love drinking it and customers are buying it, he’s not going to let that concern him.

Fortunately for drinkers there are a number of different takes on the style, while quality ingredients are increasingly at the forefront. So no matter how you prefer yours, there is something on shelves for all palates.