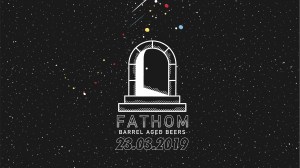 Green Beacon is set to launch a new brand called Fathom that focuses on barrel-aged beers.

Fathom will be launched on Saturday 23 March during Brewsvegas 2019. The free event with showcase the new brand’s first three beers, as well as a number of previously released barrel-aged beers from the cellar.

“We’ve been planning this for a long time, but the nature of these beers meant we had to store them away and wait patiently until they were ready,” explains Johann Van der Walt, Green Beacon’s head brewer. “The idea is to introduce drinkers to something completely different to the hop-forward beers we’re known for.

The name was chosen to remain in keeping with the rest of the brewery’s nautical theme.

“We knew it had to be nautically themed, to keep in line with the rest of the Beacon branding,” says Chris Borbas, Green Beacon’s general manager. “Fathom is a unit of length equal to six feet, used in reference to the depth of water.

“Barrel ageing is a dark and mysterious technique with unexpected variables. We’re navigating uncharted waters as we dive deep into the abyss.”

The new brand’s branding is a collaborative effort spanning three continents, with help coming from South America, Europe and of course, Australia. The underlying artwork that will be a common thread among all Fathom designs is a piece that was created by Portuguese muralist and illustrator Jokin Murguizu. The Fathom logo and font work was created by Scott McNally, an Australian expat freelance graphic designer living in Stockholm.

“With such disparate contributions coming together to form the overall theme we had to ensure the series remained punctuated by continuity,” adds Charles McKay, Green Beacon’s venue manager. “Each individual release is denoted by simple geometry and colour to signify the style. This allows us a wide scope of variation and even a level of playfulness when it comes to representing the flavours and characteristics of a constantly evolving series of products.”

Green Beacon plans to release further Fathom beers as the year goes on, with most of them becoming available in very limited amounts both on tap and in cans around the country.