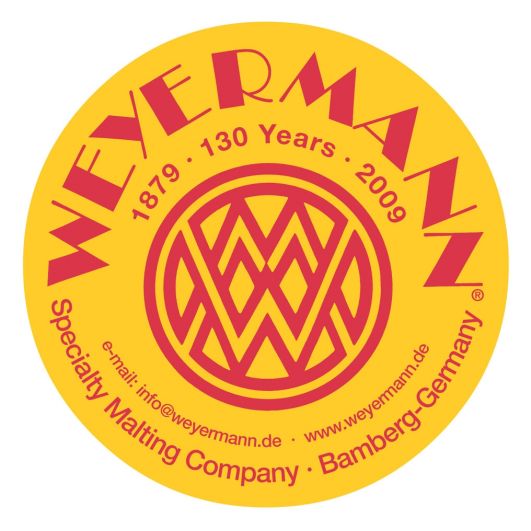 Sabine Weyermann and Thomas Kraus-Weyermann got awarded with the “Goldene BierIdee 2011” from the Bavarian brewers union and the Bavarian hotel- and restaurant association on the 14th of April 2011. They both received the certificate on the festive coronation gala of the 2nd Bavarian beer queen in Munich.

Sabine Weyermann and Thomas Kraus-Weyermann got awarded because of their great engagement as world wide ambassadors of the Bavarian beer culture as well as their sedulous and creative support to preserve the Bavarian beer diversity according to the Bavarian purity law from 1516.

In the middle of this picture:

Also awarded got Joachim Kaiser from the restaurant “Meyers Keller” in Nördlingen for his great engagement to present regional beer specialties in his upmarket restaurant as well as his participation in the Slow Food® campaign, promoting the slogan “this is how our region tastes”.

Proud to also receive the award were Stefanie and Dr. Alois Plößl from the Rhanerbräu GmbH & Co KG in Schönthal. Their high quality presentation of the Bavarian beer within the overall concept “experience Rhaner Beer” and their endless enthusiasm to preserve the Bavarian beer culture convinced the judges as well.

Brewer union president, Michael Weiß, emphasized in his speech, that there are certain companies whose engagement for the Bavarian beer culture go beyond expectations and that they more than deserve the award of the “Goldene BierIdee”. He pointed out, that not only the brewers and the hotel and restaurant industry are innovative, but also private initiatives, beverage stores, communities and rural districts and more and more companies whose business is related to beer get involved.

Sabine Sahlinger, working in the accounting department of Weyermann®, entered the contest to become Bavarian beer queen 2011. In the end Barbara Stadler, a student of tourism, won the contest. She convinced the jury and 170 invited guests at the gala in Munich with a professional beer presentation as well as lots of charm and elegance.

Weyermann® Malt was established in 1879 and produces these days more than 80 different types of malt, eight extracts, SINAMAR® und BIO-SINAMAR®.

We deliver our products to around 3000 breweries and wholesalers in over 118 countries worldwide.

For further information on the company Weyermann® or our products please contact sabine.weyermann@weyermann.de