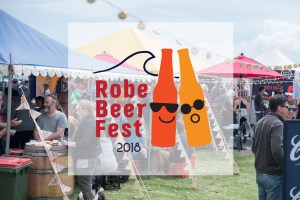 The Robe Beer Fest is returning in late October for the fifth year running, and offers homebrewers with the chance to brew their beer at Robe Town Brewery.

The Robe Beer Fest is a community event organised by volunteers of the Robe Tourism Association, supported by local businesses and sponsors. Preparations for the event are well on the way, and organisers are calling for local volunteers to help out on the day to make to make this year’s festival another success. Last year, around 2,000 people attended the event.

Set on the Foreshore in the seaside town of Robe, SA, the festival started life as a homebrew competition. Gold, silver and bronze medals are on offer in 10 different beers categories, while feedback on the brews will also be provided by the judging panel.

“There is a prize pool of $1,000 which will be split between the Best Local Brewer and the top three Best Beers of Show,” says Maris Biezaitis, owner and brewer at Robe Town Brewery. “The winning homebrewer will get to make their beer on a bigger scale for next year’s festival. They get a day or two or three at Robe producing that winning beer or whatever beer they want to make. Depending on the beer and how things go, they’ll be able to make 300-1,000 litres in volume.”

The winner of the homebrew competition will be announced at a ceremony on 27 October, and will have the chance to brew their beer on a larger scale at the local Robe Town Brewery.

The Robe Beer Fest 2018 Festival beer is a French-style Saison, brewed by last year’s homebrew competition winner Ben Rowley from Adelaide. It will be available on tap at the festival and for takeaway purchases in stubbies. A small number of seasoned kegs brewed by previous winners will also be tapped.

In addition to the competition, Robe Beer Festival will be showcasing a unique collection of small, independent breweries, and this year there will be presentations and talks about brewing throughout.

“There will be talks from brewers and beer-related professionals,” says Biezaitis, one of the event organisers. “Some are technical and a couple are about former homebrewers getting their dream into the reality of a business.”

Running from Friday 26 October to Sunday 28 October, the festival will feature nine different brewing companies, as well as a selection of local wineries, gourmet and festival food stalls. There will also be live music on offer and of course the homebrew competition.

“Most of the breweries that we’ve invited to come, we’ve focused on breweries with homebrewing roots, guys who started out homebrewing and brewing on a small scale,” adds Biezaitis.

“Besides the foreshore festival on Saturday, there are other official events being organised at local venues throughout the weekend,” says Brenton Lynch-Rhodes, festival convenor. “These include more live music gigs, a beer paired long-lunch, darts competition and beer specials at local eateries.”