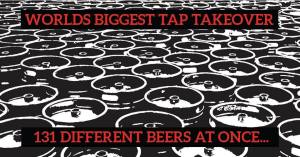 On 8 September, The Prince Albert Hotel in Ipswich, QLD, opened 131 taps to the public, each with a different beer from Dainton Brewery.

The idea came about over six months ago when head brewer and co-founder Dan Dainton was in Brisbane with his distribution company.

“We’d put on two kegs of beer, which I thought was pretty good, but normally they would go for eight or ten,” says Dainton. “Then I found out that they had 72 taps. I was like ‘What the fuck? I’m going to talk to Jim about this get us on all 72’. I talk to him about taking over all 72 of their taps, but he said ‘We’ve actually got 108 taps. How about your try that?’ I said ‘Sure!'”

The brewery estimated it would take six months to brew enough different beers to cover 108 taps. However, a quick internet search then revealed the Guinness World Record for a tap takeover to have been set in the USA at 130, so the number was upped to a 131 in a bid to break the record.

“So we started brewing beer,” recalls Dainton. “We did 90 on our pilot system here, which was done by our brewer Peter Lowndes, and then we did about 40 on our large system. 131 kegs of different beer on tap at one time, all brewed here.”

Dainton brewed the ‘bigger, boozier, darker’ beers first, before moving on to sours and then brewing the lighter, hoppier beers towards the end in order to ensure freshness. Brewing was finished two weeks before the event, and then the issue of transportation to Brisbane began.

“It was 13 and a half pallets of kegs that went up,” says Dainton. “And we didn’t get it all to the hotel until 24 hours before the event started!

“The day went off really well. The guys at the hotel did an exceptional job. We went through and poured every single beer and we’re sending it off to the Guinness World Record.”

As well as an attempt at a world record, the event was also a useful trial for Dainton, with a champagne pale pale, its Wagon Wheel Porter and a pineapple and coconut beer all running out on the first night. These three will be brewed on a larger scale after their positive reception.

“We’ve learned a lot,” says Dainton. “It was great to see what people are drinking and what they like. We drew a lot of people from Brizzie and the state, and a couple of people came up from Victoria as well.

“I think it will be a while before we hear from Guinness. It can take months to get this sorted. But as far as we know, it’s the biggest one.”