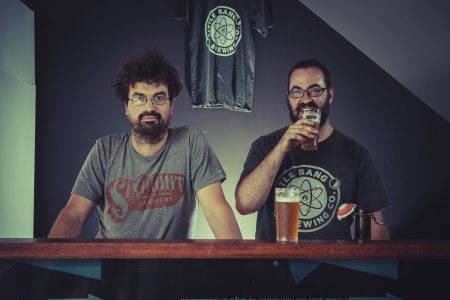 Since opening their ‘teeny tiny brewery’ in the suburbs of Adelaide, business has been going “gangbusters” for former video game workers and passionate homebrewers, Ryan Davidson and Fil Kemp, the founders of Little Bang Brewery.

So much so that the guys will be officially launching in NSW this weekend with a kick-off party at the Noble Hops.

Beer & Brewer caught up with Ryan Davidson to find out why these former homebrewers decided to take the leap into opening their own brewhouse, and how things have been tracking since then.

“I was working as a sales rep in the craft beer industry and Fil my business partner is a refrigeration mechanic,” said Davidson.

“Being a refrigeration mechanic Fil had built the world’s greatest homebrew rig in his shed and we had been brewing together for some time, and it just sort of hit me that the beer was tasting better than half of the stuff that I was selling, so we thought why not give it a crack.

“So we presented a sensible spreadsheet to our wives and got them to release funds to allow us to build a commercial brewery in Fil’s garage right there.”

It was in 2013 when the guys began cobbling together bits and pieces of second hand brewing and winery equipment to get their start. Then in late 2015, they moved into their current venue in Stepney, and according to Davidson, “it’s been going gangbusters ever since. We’re just constantly hanging on to the rising balloon”.

“We completely underestimated how many people want to come to a draughty old warehouse because there’s a brewery in it. We honestly thought that it would be about half a dozen brewing nerds who would want to talk about yeast propagation every now and then.

“When we first started, I had a figure in mind for the cellar door to make each week and now if we’re not making that in a night then we’re like ‘what the hell happened’. It’s really by a factor of 10. It’s much, much bigger than we thought so we’ve spent the whole year putting the wholesale plan to the side and really doubling down on the retail, because it’s good for cash flow as a small business,” Davidson told Beer & Brewer.

“It’s been incredibly positive and it’s something that we never really intended, but if anything we’re really more of a venue now than we are a wholesale operation. But I’d like the business to be diverse and all of the revenue streams to be equal so that one can prop up another.”

Little Bang has around 22 beers in its regular roster, with Galactopus, its 10% ABV American Barleywine Double IPA, starting to build up quite a following.

Currently around 75 per cent of the beer brewed at Little Bang is poured through their own taps, but this year they are looking to ramp up their wholesale arm.

“We’re looking to really ramp up our bottles and cans this year and get a reliable core range out there. That will hopefully be by the time it gets crazy in summer (although it hasn’t seemed to get any less crazy in winter). We keep waiting for this quiet period that we’re going to have where we can actually regroup and figure out what the hell we’re doing.”

Little Bang is mainly distributed around Adelaide at the moment, but with the launch at Noble Hops this Saturday and a new distribution partnership with Sydney’s Bucket Boys, we can expect to see a lot more of them in NSW and also in Victoria over the coming months.