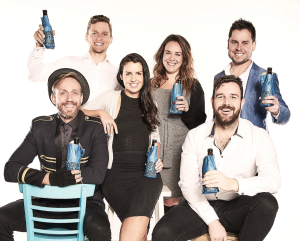 East 9th Brewing has said it’s exceeded its goal of raising $50,000 for the Polished Man charity, which looks to end violence against children.

With the support of more than 50 hospitality venues and liquor retailers across Australia, the Doss Blockos Polished Man team is one of the top fundraisers for Polished Man this year.

Speaking about the fundraising efforts, the Doss Blockos team said: “Venues supported the cause through raising awareness by serving Doss Blockos bottles in blue bags, over 100k of them in fact, and pouring the pale lager from limited edition Polished Man tap handles.

“Several noteworthy venues, organisations and people went to extra lengths to aid the campaign. The Emerson held a Grand Final Eve event, contributing their door takings to aid the cause. Neptune Food & Wine bar held a series of dinners that were supported by wines from Get Wines Direct. Pocket Bar painted their entire venue blue and Bondi Cellars created a window display to rival Myer at Christmas time.”

In addition to the hospitality side and blue bags, cult street-wear label Ichpig collaborated with East 9th to release limited edition Polished Man hoodies and t-shirts.

To show its appreciation for all the love and support to Polished Man, the Doss Blockos team are taking key contributors to New York in early November to experience the inspiration behind the brand.

Donations will still be accepted until 14 November at the Polished Man website.