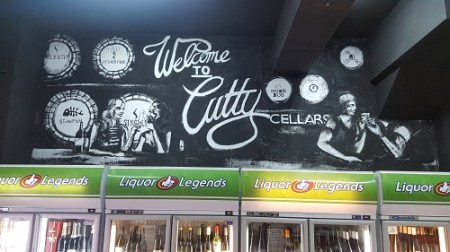 Craft beer retailer Cutty Cellars, which has three Sydney stores in Crows Nest, Ashfield and Bankstown, is rebranding to the Crafty Club.

The move is in a bid to streamline the branding across all three stores as well as lay down the foundations for future growth.

Luke Griffis, the Operations Manager at Cutty Cellars told Beer & Brewer that the transition will happen over the next six to 12 months.

“We’ve got our membership program, which is called the Crafty Club and that’s kind of just become what people know us as now. So we’re going to rebrand our three stores over the next six to 12 months.”

At the moment two of the stores are called Cutty Cellars Crows Nest and Cutty Cellars Bankstown, but the Ashfield store is called Ashfield Mall Cellars, so the branding “is all a bit confused at the moment,” according to Griffis.

“We’re trying to focus on building that Crafty Club brand so that it will be less confusing. So all of our staff wear shirts that say Crafty Club now, and as we open more and more stores they will all be under the one name.”

Cutty Cellars Crows Nest has become a destination store for craft beer lovers in Sydney. While all three stores range anywhere from 600 to 1000 beers at any given time, the Crows Nest store, with its 200sqm of space, has the biggest range.

“Our biggest seller is the mixed six-pack. So customers will come in and pick six different breweries or beers that they like and just mix them up and we’ll give them their 20 per cent discount, so that’s our number one.

“We also do some pretty unique giveaways – and not just a gift with purchase or a stubby holder, which doesn’t seem to really work. What we’re doing at the moment is buy any case of Nomad beer and you’ll get a free voucher to go to the brewery with three mates and get a brewery tour and your first paddle each on the house. So just special, unique offerings like that seem to work and really entice people.

“We have a really close relationship with Experienceit Beverages which owns Nomads, so we’re in a partnership program with them and every couple of months we’ll work out a plan of what we can do and what we can offer that’s going to help move product and be a bit unique.”

Cutty Cellars Crows Nest also runs a lot of events, including Craft-Oberfest and an annual Beer Fest. The next Beer Fest is looking to be held in July or August.

“We’re also going to start working with a couple of the whisky suppliers like CCA and we’re going to do some whisky masterclasses in-store as well, and even work with some wineries and do some wine masterclasses. So there’s plenty that’s going to happen over the next 12 months,” said Griffis.