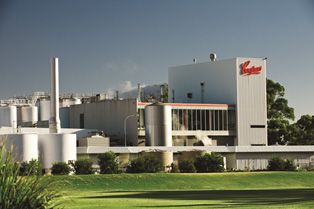 Coopers will spend more than $4.5 million on the brewery in the coming months

Coopers Brewerycontinued to enjoy strong ongoing growth during the 2013-14 financial year with record sales and turnover figures. However after tax profits dipped 9.1 per cent from $30.8 million to $28.0 million as a result of costs associated with the installation of a second bottling line and beer sales shifting from kegs to less profitable packaged beer formats.

Sales of the International beers distributed by Coopers – Sapporo, Carlsberg, Kronenbourg 1664, Kronenbourg Blanc and Mythos – rose an impressive 44 per cent in volume and now represent 9.8 per cent of Coopers total beer volume. Coopers brews Sapporo and Carlsberg under licence at Regency Park.

“Overall, Coopers now represents just under 5 per cent of the total Australian beer volume” Dr Cooper said. “However, total Australian sales for 2013-14 fell about 1 per cent the fifth year in a row total volume has fallen. A substantial factor in this decline has been the twice yearly indexation of beer excise, which puts downward pressure on sales.

“It is now reaching the stage that the excise rises are counter-productive with the additional tax raised being offset by a drop in overall sales.”

Dr Cooper said Coopers planned to spend more than $4.5 million in the next few months to streamline truck movements around the brewery and install four more fermenters to cope with ongoing growth.

The works will also streamline truck movements within the brewery and enable up to 60 semi-trailers to be loaded each day.