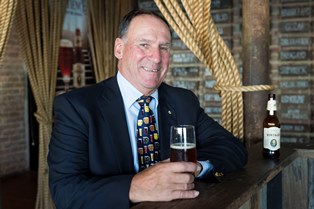 “This year’s selection of hops has been given careful consideration to ensure the best combination of bittering and aromatic varieties,” Dr Cooper said.

“Four varieties – two Australian and two American – make up the 2014 Vintage Ale. American variety Bravo provides the foundation for the bitterness of the brew, while Galaxy and
Ella from the hop-growing regions of Tasmania provide fruity aromas and flavours of peach, grapefruit and passionfruit. There are also layers of spicy notes to complement the citrus and tropical notes.

“The other American variety, Cascade, harmonises and emphasises the floral and fruity undertones arising from the Tasmanian hops and from our distinctive ale fermentation.”

“Limited production and strong demand in the market saw last year’s run of Vintage go quickly,” he said. “We encourage Vintage lovers everywhere to stock up early so they don’t miss out.”

The Vintage release coincided with Glenn Cooper retiring from his executive role at Coopers Brewery. Cooper, 63, the Director of Sales at Premium Beverages, will continue as Chairman of Coopers, a position he has held since February 2002.

Coopers Managing Director, Dr Tim Cooper, said that Glenn played a key role in creating consumer engagement for Coopers and its brands during the strongest period of growth in the company’s history since before the Depression.