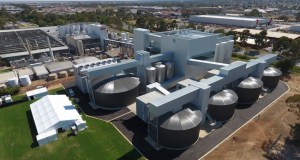 Coopers Brewery’s new malting plant at Regency Park has been named equal best maltster in the world at the World Barley, Malt and Beer Conference.

Held at the Palace of Culture and Science in Warsaw, Poland, the conference saw an international jury drawn from members of the global brewing supply chain judging the Global Brewing Supply Awards. They named Coopers and The Swaen in the Netherlands as the Maltsters of the Year 2019.

Coopers and The Swaen jointly took the title ahead of other shortlisted malting plants in Germany, Vietnam and India.

The Global Brewing Supply Awards are conducted every two years to recognise the brewing world’s business innovation and technology leaders.

Coopers’ maltings manager Dr Doug Stewart, who accepted the award on Coopers’ behalf, said it was a remarkable result.

“The plant was officially opened in November 2017 and produced its first batch of malt the same month,” he says. “It is now operating at nearly 90 per cent capacity, well ahead of budget, on the back of strong demand from brewers, distillers and food producers domestically and internationally.

“Being named joint Maltster of the Year ahead of major international operators in only our second year of operation underlines our commitment to innovation and quality.”

The $65 million maltings has a working capacity of 54,000 tonnes of malt annually.