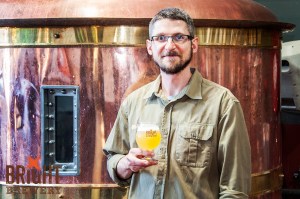 Bright Brewery has announced the arrival of a new head brewer – Reid Stratton.

Stratton officially stepped into the brewhouse on 21 March 2019 to join assistant brewer David Stokie. He joins the brewery from New England Brewing Co, NSW, where he has been head brewer since 2014. Stratton also has brewing experience in the USA, following stints at Jolly Pumpkin Artisan Ales in Michigan and Grand Teton in Idaho.

“I really enjoy the transformative process of fermentation,” says former baker Stratton. “It’s about taking those raw materials that, on their own, aren’t very exciting and turning them into something beautiful and nuanced. I love the craft, the science and the art that goes into that.”

“Reid’s passion for brewing and experience at the genesis of the craft brewing movement in the USA is a huge asset for us,” says Scott Brandon, founder of Bright Brewery. “And his experience in brewing very specialised beers such as sour, wild and barrel-aged beers is particularly inspiring. Having him on board to help take Bright Brewery’s beers into the future is really exciting.”