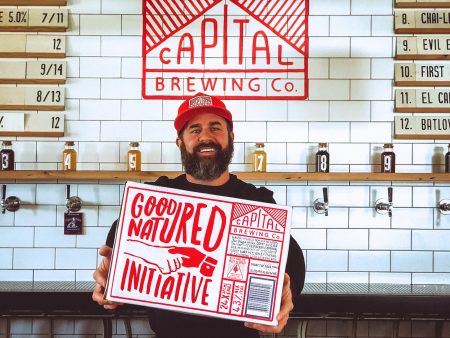 Capital Brewing Co has announced the establishment of a new initiative that will see the company reinvest its excise tax rebate back into the community.

The brewery will reinvest the additional $70,000 rebate that was formalised in Tuesday night’s budget into its ‘Good Natured’ initiative, which will see Capital’s beer and brewery experiences made available to community groups to help them generate funds.

The announcement comes off the back of Treasurer Scott Morrison’s initial beer excise tax cut announcement at Capital’s taproom in Fyshwick last Friday 4 May, and the full Federal Budget reveal on Tuesday night.

“We expect the community will be able to raise will in excess of $150,000 on the back of our donations,” says Capital’s Community Engagement Manager Dan Watters.

And in a show of good faith, the brewery will launch its Good Natured initiative on 1 July 2018, a full year before the tax cuts come into effect.

Since its opening its brewery and taproom in September last year, Capital has already supported more than 60 organisations working in fields such as cancer research, foster care, and women’s refuge.

“We’re grateful for both the support of our local community and the fabulous working they do,” adds Watters. “The best way we can support them is to maximize their ability to raise critical funds for their own organisations.”

Further details on how community groups can get involved will be released on Capital’s website in June.