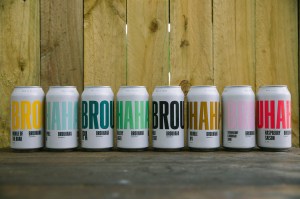 Brouhaha Brewery has undergone a brand refresh that coincides with the launch of its rebranded cans.

The brewery, which is located in Maleny, Queensland, will celebrate its second anniversary in June. In February it doubled the size of its annual brewing capacity by adding one 50hL and two 15hL fermentation tanks. In addition, Brouhaha has invested in its own canning and packaging line.

There are eight beers in the core range – Middle of the Road, Maleny Lager, New Zealand Pale Ale, IPA, DIPA, Raspberry Saison, Strawberry Rhubarb Sour and Milk Stout. A range of seasonal and limited release beers will also be canned as they are brewed.

“Our own canning line opened Monday last week,” explains Toby Stodart, who runs the marketing and events for the brewery. “We’re super excited about it. Going forward we’ll be canning every Monday and Tuesday to make sure we’ve got that core range. Not all seasonals will be canned, but if we make one that people get really excited about… We did an Apricot Sour recently and that was so popular that we’re going to brew that again and it will go in cans.”

The redesign aimed to remove any misconceptions about the quality of canned beer, creating a product that would be ‘just as welcome at a BBQ as it is at a wedding’.

“At the moment, we do a rectangle shape with the colours representing the colours of the beer,” adds Stodart. “There’s a slight redesign with our logo, but it’s very small. We’re working on the website as well. We’ve got lots of stuff in the works.”