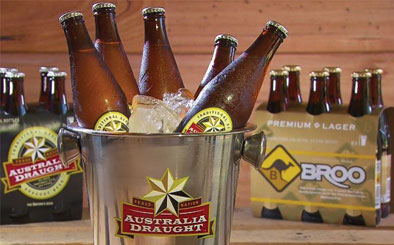 Broo Limited has announced that it has completed the planning strategy for its activation in China and that Jinxing Beer Group has started its production of Broo Premium Lager in the country.

Last year Broo sealed the partnership with Jinxing to produce the beer and then distribute through its nationwide Chinese network. Now, with the final packaging design slightly altered to better suit the Chinese market and further enhancing the Kangaroo logo, Broo’s Founder and CEO Kent Grogan, is understandably delighted to see production underway.

“I have spent many years in China looking at opportunities for Broo and many more years cultivating the relationships to shore up its success,” Grogan said.

“I could not be prouder to have formed a partnership with the Jinxing Group. Jinxing is an incredibly well respected Company in China and we are thrilled with their dedication to the success of our uniquely Australian brand.

“To see our vision and goals come to fruition is especially fulfilling.”

Jinxing has an annual production capacity of around 200 million cases pf beer per annum and has one of the largest distribution networks in China, enabling Broo to tap into the world’s biggest beer market, with volumes exceeding 25 billion litres per year.

The move comes as Australian craft beer becomes more popular in Asia and China. Three breweries, Australian Brewery along with Kaiju from Melbourne and Nail Brewing from Perth have recently returned from a craft beer showcase and tour around China, which Australian Brewery’s Sales and Marketing Manager, David Ward said was a successful trip.

“It went really well. Everyone’s beers were well received and there was heaps of interest, so now it is just about choosing the right partners,” he said.