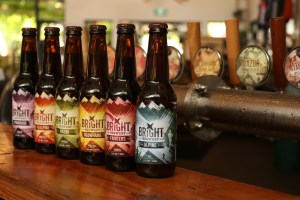 Bright Brewery has announced that its core range of beers has been completely rebranded.

Designed to make each beer easier to identifiable, the rebrand also aims to create a stronger link to the High Country region where they are made, and to celebrate the adventurers who live and play there.

The new-look Blowhard and Alpine XPL are available now, with rebranded Razor and Hellfire to follow on 1 April, and Fainters and Staircase following on 1 June.

Blowhard Pale Ale (5.0% ABV) is inspired by mountain bikers who tackle Victoria’s iconic High Country trails and is named after nearby Mount Blowhard. Alpine XPL (4.5% ABV) is a new Core Range beer, which replaces Bright Lager, and is dedicated to the trail runners of the region.

Razor Witbier (5.0% ABV) features an homage to the road cyclists who frequent the Alpine hills and valleys and is named for Razorback Ridge on Mount Feathertop. Hellfire Amber Ale (5.0% ABV) pays tribute to the skiers who tackle the mountainous terrain in winter, such as Hellfire Gully off Mount Hotha.

Fainters Dubbel (8.5% ABV) is one for the paragliders which are synonymous with Bright and the Fainters, the remote peaks beyond the town; and Staircase Porter (5.7% ABV) recognises the hikers who tread among the mountains, such as Staircase Spur – the steepest track to Victoria’s highest peak.