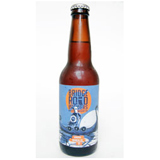 When Bridge Road Brewers teamed up with Norwegian craft gurus Nøgne ø to produce a really remarkable pair of brews, they probably knew that they were doing something pretty special.

The partnership saw both teams brewing a special release beer, before packing it away in barrels and shipping it to the other side of the planet – the Aurora Australis heading north to Norway, and the Aurora Borealis making the reverse trip south. It follows the Norwegian tradition of sending their alcohol around the world so that it can benefit from the temperature variations that occur crossing the equator.

Both of those beers were very well received – which is why we’re all a bit excited that the Aurora Borealis II, the second iteration of the experiment, is ready to go. It’s a Belgian style Tripel that has reportedly spent a good chunk of its life in the warm surrounds of brandy barrels as it made its way south.

It’s going to be tough to find – it’s a really limited release – so it’s best to check with the good folks at Bridge Road Brewers if you can’t find it at your local craft beer venue.