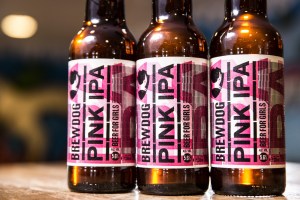 Bottles of the brewer’s core beer Punk IPA were sold with lurid pink labels for 80% of the normal price in BrewDog bars to those who identify as women. The brewer intended to trigger questions about why women continue to earn less than their male counterparts.

BrewDog is also donating 20% (the gender pay gap in the UK) from bottled Pink IPA and Punk IPA to causes that fight against gender inequality: The Women’s Engineering Society, a charity and a professional network of women engineers, scientists and technologists that inspire and support girls and women to achieve their potential as engineers, applied scientists and technical leaders; and 9to5, national membership organizations of working women in the U.S. dedicated to putting working women’s issues on the public agenda.

“The fact that the gender pay gap is still an issue in 2018 shows that a lot of lip service is being paid, but not enough action is being taken to tackle inequality,” comments Sarah Warman, BrewDog’s global head of marketing. “We want to accelerate change by empowering more women to make their voices heard and calling out industries and employees that need to do more. With Pink IPA, we are making a statement the only way we know how – with beer.”

However, the move has been labelled a marketing stunt by some, with questions asked about whether the campaign is a patronising gimmick and if the sarcasm in the joke is clear, with other brewers in the past having launched ‘girl-friendly’ beers with pink labelling.

“The beer industry has a duty to be representative of the people who drink beer,” adds Tanisha Robinson, CEO of BrewDog USA. “In practice, this means actively working toward inclusive work environments, rejecting sexist marketing and fighting societal stereotypes that push women away from spaces where beer is enjoyed. This is our overt parody on the failed, tone-deaf campaigns that some brands have attempted in order to attract women. Pink IPA is our rallying call to brewers and beer fans to rise to the challenge and change the image of beer, forever.”