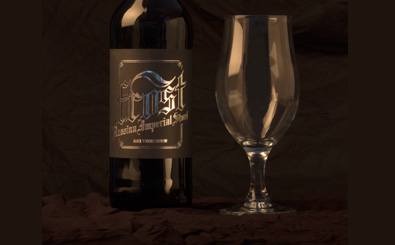 Block ‘n Tackle Brewery is celebrating its one year anniversary by crafting a special brew, with the first bottle to be auctioned for charity.

Located in Kincumber on the New South Wales Central Coast, Block ‘n Tackle started when four Avoca Beach mates homebrewing in their garages decided to take their passion pro and opened the brewery in April 2015.

Just over 12 months on and Block ‘n Tackle has brewed a wide range of small‐batch brews, including pale ales, golden ales, stouts, porters and IPAs.

In recent months, however, an extra special brew has been prepared in celebration of the brewery’s first 12 months, the limited release Frost Russian Imperial Stout.

Each of the 400 bottles in this commemorative batch has been individually numbered and with bottle conditioning, the stout can be enjoyed fresh or cellared to allow the yeasts to continue the development of the flavours.

“It’s been an amazing 12 months with so much local support for our beer and products, we really appreciate the local community getting behind our business, without it we wouldn’t be here today,” said Block ‘n Tackle director Greg Tobin.

“To give back to the local Central Coast community, we will be auctioning our #1 anniversary Frost Russian Imperial Stout on Ebay. All proceeds will go to Central Coast Kids In Need. The auction starts today and finish at 8pm on the 16th July to coincide with the one year anniversary brew do.”

To commemorate the anniversary, Block ‘n Tackle is hosting a Brew Do on Saturday, 16 July at 7pm. Tickets are $35 and can be purchased here.