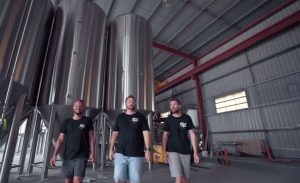 Situated at the northern end of the Gold Coast – at 14/665 Pine Ridge Road, Biggera Waters – Black Hops II, which opened on 2 March, will complement the original Black Hops brewery and taproom.

The launch of the second brewery is the culmination of an intensive period of growth for the company, which recently undertook a record-breaking equity crowdfunding campaign on the Birchal platform.

“The new brewery is going to be our full scale production brewery, which will expand our volume from 600,000 litres per year to potentially multiple millions per year,” says Black Hops co-founder Dan Norris. “While we won’t hit that target immediately, we wanted to factor in some heavy duty upscaling opportunities to meet our longer term goals.”

As well as upscaling production, the new brewery also features a 150 sq m taproom. There are 14 beers on tap, while Little Havana has its food truck on-site.

“Our original Burleigh brewery and taproom has evolved into a hub for like minded people to hang out, drink fresh beer and feel connected to their local scene,” adds Eddie Oldfield, co-founder of Black Hops. “With Black Hops II we hope to create a similar vibe for Northern Gold Coast residents.”