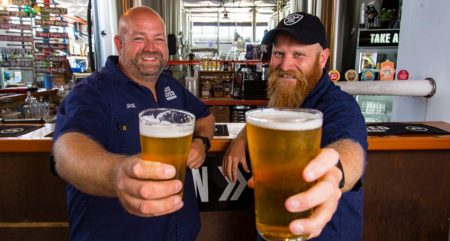 Adelaide craft brewery Big Shed will move to a bigger shed and quadruple production after receiving a grant and loan from the South Australian Government.

The $50,000 grant and $1 million discounted government loan will allow Big Shed Brewing Co to build a new brewery “within a few streets” of its existing suburban home in Adelaide.

The $2.5 million expansion will help it take production from about 250,000 litres a year up to a million litres.

The 3500sq m warehouse-style site will include the 50-hectolitre four-vessel brewery and tanks, a testing lab and a 200-300 seat venue with a beer garden, live music stage and dedicated kitchen. It will also have a new dual four-head canning line alongside its current bottling line and a coolroom to allow for deliveries direct from the brewery.

Co-founder and Director Jason Harris said the new brewery had been designed so it could eventually scale up to three million litres with the addition of extra tanks when demand allowed.

He said the new front of house venue was also a natural progression for Big Shed following the success of its 50-seat venue at its original Brandwood St site in Royal Park.

“We’re planning on putting in a stage to encourage a bit of live music maybe once a month so that will be pretty unique to be sitting in the brewery listening to live music every now and then,” Harris said.

“The way we’ve set the brewery up enables us to do systematic upgrades to add storage tanks. All the other equipment we’ve put in will be able to handle that so it’s just a matter of throwing more tanks at it to meet market demand.”

Big Shed Brewing Co was started by Harris and Craig Basford in December 2013 and released its first commercial beer in January 2014. Production has steadily grown to about 250,000 litres a year on the back of popular labels such as F-Yeah American Pale Ale, Kol Schisel German Pale Ale and Californicator West Coast IPA. Its Golden Stout Time has developed a cult following and was last month named in the GABS Hottest 100 Aussie Craft Beers for the third year in a row.

The brewery also released about 400 bottles of a Golden Stout Time Vodka just before Christmas. Made using co-tenant Never Never Distilling’s still, the unique blend sold out last week. Never Never will also move to the new site until their new distillery in McLaren Vale is completed.

Harris said the new site would allow Big Shed to enter the Queensland market and bolster existing markets of SA, NSW, ACT, WA and Victoria ahead of an expansion of international exports.

He said the original Big Shed brewery would remain and become a contract brewing incubator for small producers looking to take their first steps into commercial brewing.

“Everyone’s happy to help you at 10,000 litres plus but as a small brewer you’re pretty scared to be dropping $40,000 on a batch of gear that you’re not even sure is going to work,” Harris said.

“So this gives everybody the flexibility to do small batches maybe more often and go into the market knowing you haven’t had to mortgage your house and your child’s left arm to get it done.

“We did all this the hard way – I don’t begrudge what we did or how we did it – but it should be a little bit easier. If we can set up our new facility and this is available then that’s certainly a way we can do that.”

The new brewery is expected to create about 15-20 hospitality jobs and about 10 on the production side.

Harris said the new brewery and venue was expected to be open before the end of the year. However, he would not reveal its exact location as negotiations were still being finalised.

“I’d like to be open before summer definitely because that’s a great time to be open for a brewery,” Harris said.

“We were pretty proud of ourselves with what we did the first time round but this is going to be like starting again – we wouldn’t have expected to be doing this four years ago.

“We’ve struck a chord, we’ve proven our point, what we’ve done has worked and people are buying because they like it so we need to upgrade that and get the new facility up.

“We’re looking to stay local and if we can stay within a couple of streets of where we are then I think that’s a major achievement for the area.”