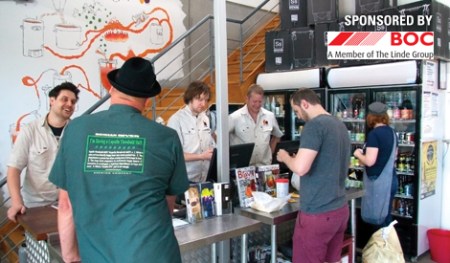 The winner of the Beer & Brewer Best Homebrew Shop for 2017/18 is Melbourne’s iconic Grain and Grape.

In 1990 John Preston opened a homebrew shop in southeast Melbourne called Southern Home Brewing with his friend Laurie Cahir. Over the following 27 years, Preston has become a stalwart of the homebrewing industry.

Since 1990, not only has he opened Grain and Grape, but he was instrumental in starting up the Australian National Homebrewing Conference.

But this isn’t about Preston, we’re here to talk about Grain and Grape, so we asked Preston what he thinks it is that makes his the best homebrew shop in the country.

“Being named the Best Homebrew Shop is very satisfying and I think it’s something that my staff deserve more than anything,” said Preston. “They are the ones who spend most of the time in front of the customers and they really put a lot into it and they are very pleased.

“One thing that’s unique or unusual about us is the number of our staff who have gone on to work at breweries. So it’s sort of seen as a bit of a career path for staff. Probably the most notable is Dan Dainton who won the Best Beer Award at the CBIA Awards this year, but lots of others have come through the place.

“From a customer service point of view, everybody knows everybody in the industry, so you’d be absolutely crazy not to be good to everybody because they are going to talk to somebody else and you’re going to end up with a bad reputation out of it.

“For most homebrewers it’s a hobby, it’s a fun thing, and it could be something that they’re going to do for the rest of their life.”

Grain and Grape specialises in all grain brewing and caters to beginner homebrewers right through to professional craft brewers and microbreweries. It even holds weekly brewing demonstrations and has its own bottle shop.

The Best Homebrew Shop Award was sponsored by: BOC

BOC wishes to congratulate the winner of the Best Homebrew Shop award, Grain and Grape from Yarraville in Victoria!

Whether you’re a home brewer or working in a craft brewery, when it comes to the gas supply for your beer, quality is absolutely key.

Gas provides much more than just the bubbles in your beer. The quality of your gas has a direct impact on the way the beer is dispensed, as well as the freshness, appearance and taste.

With carbon dioxide playing multiple roles in brewing, including carbonation and dispensing, any aromas or impurities in the gas will have direct access to the beer. Impurities could quickly spoil the flavour of your beer. With this in mind, it is important that you prioritise quality when implementing your gas solution.

With a wide variety of supply solutions ranging from compact 6kg carbon dioxide cylinders for your home brew set up, to larger 3000L Cryospeed® Cryotank vessels for your craft brewery, we have your gas needs covered.

Contact our friendly Food & Leisure Team on 1300 770 526 food&leisure@boc.com today to find out more. They are always on tap for a high quality conversation about how to achieve the best quality beer.