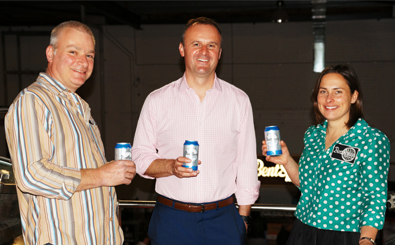 BentSpoke Brewing Co. has invested millions of dollars into converting its Mitchell warehouse into a brewery and canning facility and is now ready to share its efforts with the thirsty people of the ACT.

It is the crescendo of a busy period for BentSpoke, which has produced more than 300,000 litres of beer in excess of 50 styles since opening its Braddon brewpub more than two years.

“We’re proud to have invested in the local community to make it easier for Canberrans to enjoy our beer anywhere, anytime and anyhow,” said head brewer and owner Richard Watkins.

“The new facility, with 30,000 litres of fermentation capacity is certainly the largest brewery Canberra has ever seen and will be one of the largest independent breweries in Australia. And in another few months we will be stepping that up to 50,000 litres.”

Watkins has chosen cans over bottles for his award-winning brews as they are impervious to light meaning the beer arrives in the best possible condition, they’re lighter reducing the carbon footprint of shipping and are readily recyclable.

As part of Canberra Beer Week, BentSpoke is throwing the doors open to the new Cannery on 6 November, 11am-6pm. The public can get a first look at the new brewery in all its glory along with food by guest celebrity cook Paul Mercurio, head chef Matt Morrissey and food trucks, live music, a jumping castle and face painting for the kids from 12-3pm and brewery games.