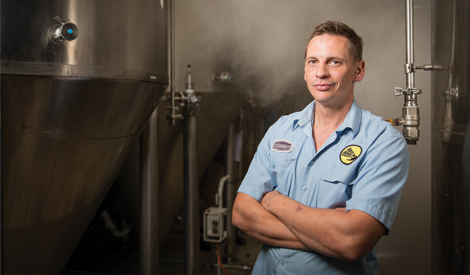 With judging for the Australian International Beer Awards (AIBA) taking place next week (13-15 May), Beer & Brewer caught up with Ian Watson, AIBA judge and co-owner/head brewer at Fortitude Brewing Company.

Conducted by The Royal Agricultural Society of Victoria, the AIBA is the largest annual beer competition in the world assessing both packaged and draught beer. The competition is judged blind, which means the judges receive the beer with no information about its origin, only what class it is entered in, the ABV, if the beer is filtered and if the beer is bottle conditioned.

“In general we are looking for a beer that is free of technical faults, meets the style guidelines and shows exceptional character in the glass. Ultimately we are looking for beers that make us think ‘Wow! I wish I had brewed that’,” said Watson.

With just under 1,700 entries this year, the judges will taste around 50 different beers per day. So after tasting that many beers are they surprised by which ones end up on top?

“Sometimes yes and sometimes no. What must be remembered is that the judges are looking at one glass of beer from one batch that the brewery has produced. A brewery may make dozens or even hundreds of batches of that beer in a year but the judges only see one glass of one batch,” explained Watson.

“Every other batch of beer may have been that wee bit better than the one being judged and so the beer doesn’t do as well as you think, or on the other hand the batch that was entered may have been an absolute standout and will get a better result than you may think based on previous experience with a beer. The real teller is the beers that consistently win gold after gold, year after year.”

According to Watson, beer classes such as IPA and American pale ale are usually very strong in numbers, as are the pale lager classes. While the specialty classes often show up some interesting ideas with big ‘wow factor’ beers.

“The beers that do well are those that have been well thought out in the recipe stage, have been made with good process technique and most importantly arrive to the judging table in their peak condition,” said Watson.