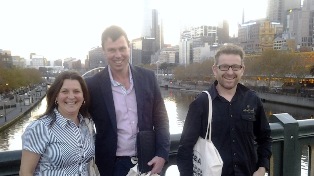 A chance kick around a New Zealand craft brewery has led to BeerCo bringing Gladfield Malt to homebrewers’ doors, homebrew shops and clubs around Australia.

Fed up working from pre-dawn to post-dusk growing malting barley for the world’s largest multinational malting company, Doug and Gabi Michael took the leap of faith into craft micro-malting using their own farm-grown barley 10 years ago in Canterbury, New Zealand.

One of the first craft malting in the Southern Hemisphere, Gladfield Malt has been generously supported by the rising tide of Kiwi craft brewers. A premium quality craft malt brand, Gladfield Malt is much loved and widely used by professional and homebrewers in New Zealand.

Two years ago while in Christchurch, home brewer and craft beer enthusiast Dermott Dowling from BeerCo was busy enjoying a tour of Harrington’s Brewery with head brewer Mark White and stumbled across a pallet of Gladfield Malt. A few phone calls later and a visit from the Micheals to Melbourne turned into a shared opportunity as Dowling helped introduce Gladfield Malt to Victorian craft breweries.

Despite limited supply of these fine malts, they are now available for Australian homebrewers nationwide. There are 25kg bags for immediate order and delivery to homebrewers’ doors or small 10 bag pallet orders for home brew clubs and shops.

Due to overwhelming support and demand from pro-brewers nationwide BeerCo will only be supplying these precious limited supply craft beer malts to the home brewing community.

Gladfield Malts are offering a special discount for Beer & Brewer readers, just use the coupon code ‘BandB’ at the checkout for 10% off your first order valid right up until 31 December 2014.