Held in the amazing BMW Edge at Fed Square, with sparkling views of the Yarra as a back drop the conference got off to a cracking start with Greens Leader Senator Christine Milne opening the day’s proceedings with praise for the Australian craft brewing industry and all the hard work that has gone into getting the tax reforms passed in this years budget. To the applause of the audience, she acknowledged those who had worked so hard for the change and never given up. Senator Milne was clearly delighted to be present at the conference with fellow beer-lovers as she encouraged the diversification and sustainability of the craft brewing industry as its assists in bringing the “bush back to life”. In conclusion, the senator raised her – metaphorical – glass to the industry, and the day kicked off. 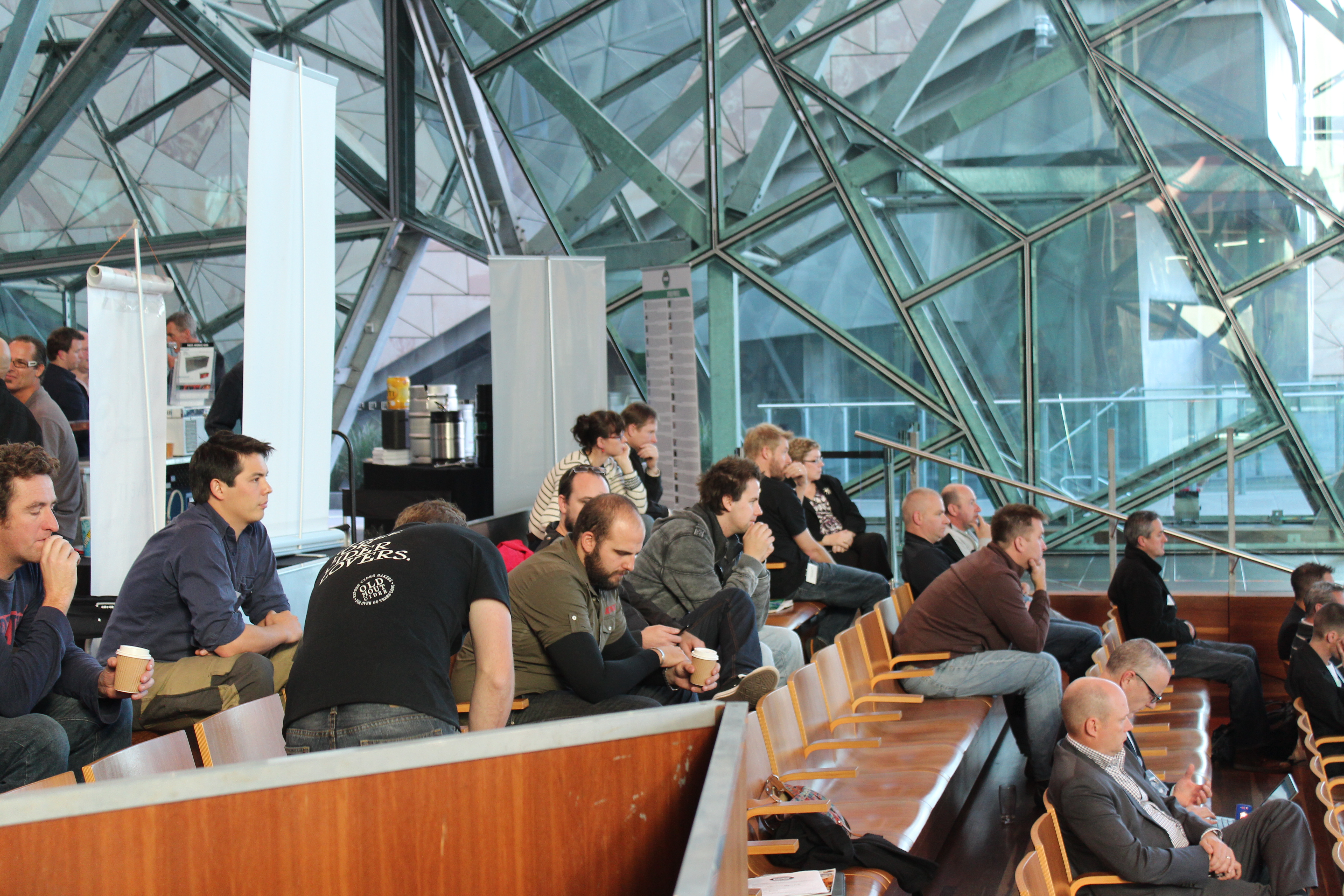 And on that positive note, with the aromatic smell of hops hanging in the air, the first of the day’s sessions got underway with a discussion about packaging with representatives from Plasdene Glass-Pak and other industry. Apart from a rather wild analogy between beer bottles and bananas, the discussion traced the trends in the industry right now – namely the upswing in PET use and the return of the aluminium can, as American craft brewers start to embrace it. There was also an interesting comment from the Labelhouse about the fact that label makers and label designers need to be engaged at the same time in the design process. This could save microbreweries a stack of money and will get them the best possible labels, as opposed to one that had to be drastically altered to make it even work. Owen Johnston from Moo Brew seconded that comment, adding that brewers need to work with industry experts to get the best products possible.

The next session was kegging and draught beer – sponsored by SmarterPour – quite a fascinating one in terms of what is available to microbrewers who are aiming to get their brews on tap in mainstream pubs. These include everything from standalone taps that clamp onto the bar, so as to not take up one of the main taps, second-hand reconditioned kegs to cut the cost of the initial purchase and even plastic kegs to prevent theft for the scrap metal trade.

The Taste Training session was very quickly filled by those eager to get their hands on a glass of beer, but as Hugh Dunn from Edith Cowan explained, the purpose of the session was to teach them how to spot bad beer and exactly what was making it bad. The speakers in this session reinforced the importance of tasting your own beer and getting independent people to taste it for you – this is especially important as some people cannot taste some of the factors that can indicate an off brew. Additionally, it’s more likely that faults can be spotted and traced back to the source of the problem.

After much tasting and thorough discussion of exactly what each fault tasted like, Caraline Hill the representative for the Australian Tax Office took to the stage to help with any questions regarding excise administration. The most important point to take out of the session was that the ATO is more than happy to help and give guidance to those who ask for it as the regulations can be complex and a little overwhelming for those starting out in the industry.

After a quick break, a coffee from Beer DeLuxe and a wander around the trade show stands, the delegates were back in for the sessions on ingredients. First off the mark, the hops suppliers – including sponsor Hopco – were keen to point out the popularity of certain varieties and the difficulties that could cause – especially with the US hops right now. All the speakers were happy to chat about the new varieties coming out on the market but warned that that bigger breweries were also watching the market and looking for new hops to buy in bulk. But the main message for brewers was to make sure they got their orders in 12 months in advance or even just gave their supplier a heads up about what they would be needing in the future, to ensure they don’t miss out. The yeast and malt sessions held similar messages for brewers: talk to your suppliers about the new products coming out and don’t be afraid to experiment. New yeasts are always arriving on the market – especially from sponsor Bintani – including those that are specially designed for bottle conditioning. And there are a fantastic array of malts out there on the market, including everything from malt to rye to buckwheat – used for gluten free beer – so seeing that some brewers use up to 12 different types of malt in a single beer style, there is plenty of scope for imagination and experimentation. 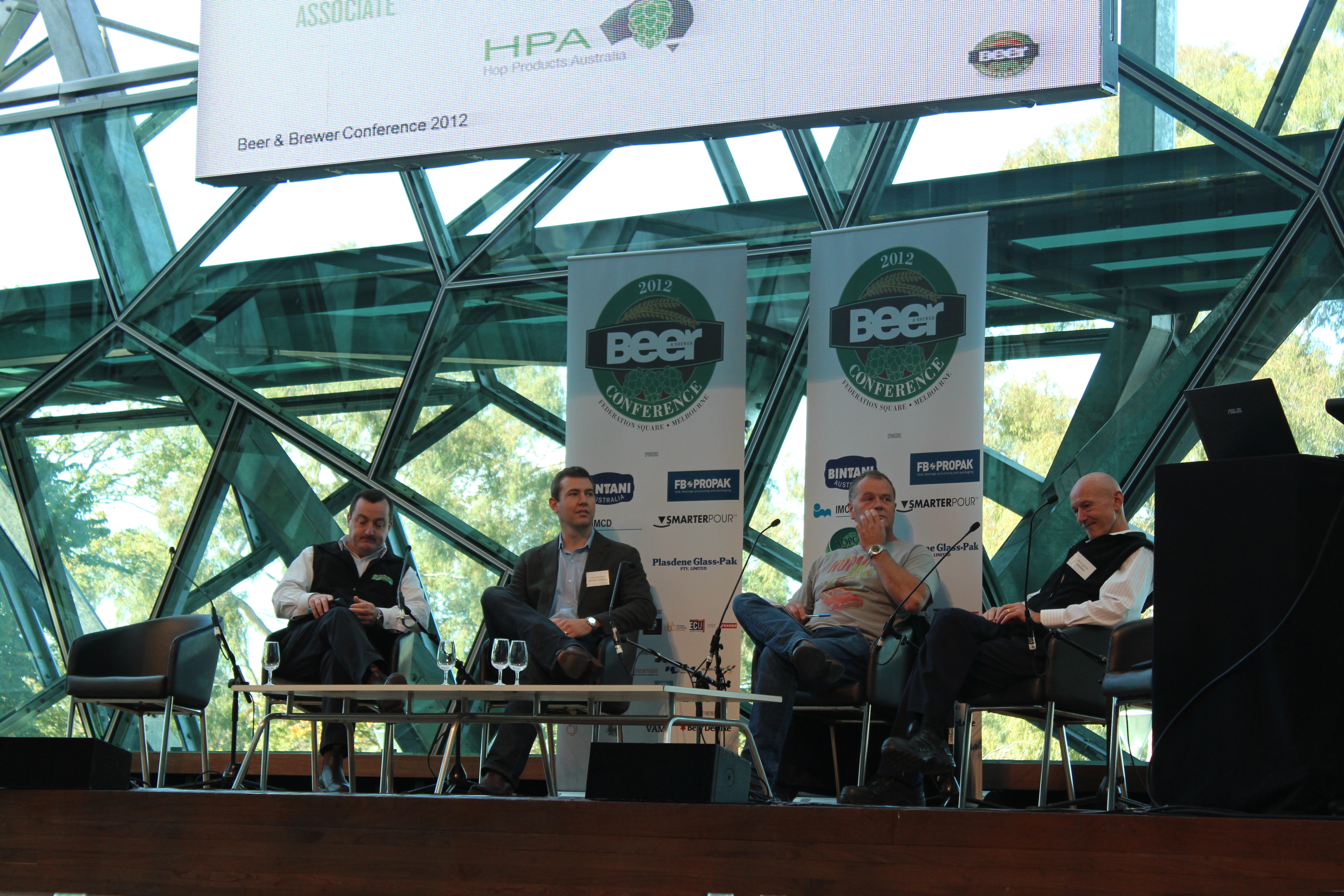 After a quick lunch break, the beers were cracked out, the portable bar got pumping and everyone settled in for some of the most popular sessions of the day. The Starting a Microbrewery and the Business of Brewing session – sponsored by FB*PROPAK – was very well attended, with some keen new brewers turning up to get pointers from the very best. Feral Brewing’s Brendan Varis gave some good pointers on what not to do while Howard Cearns, of Little Creatures fame, admitted that his own success was more a matter of trial and error – with a lot of errors to begin with. But couple with some great advice from Costa Nikias about what technical support is out there in the industry for start ups, the session was very positive and there was more than one person feverishly taking notes.

There were plenty of questions for the panel in the Building a Beer List session, as well as plenty of lamentation that Australia’s top restaurants are still failing to move their beer list beyond mainstream lagers. Janet Hollyoak was very vocal on the need to train staff above all else. While you might have a lot of staff who know things about wine, it is important to get them passionate about the beers they are selling so that they can pass on their enthusiasm to the customers and make them come back for more.

The final session of the day was on Cider – sponsored by IMCD – and it threw up some really important issue that have been enveloping the industry as a whole. Nothing was off limits, with everything from the difference between cider and fruit wines, to the taxation of cider and what the alcopop tax could do to the industry. Drew Henry, of Henry of Harcourts, gave some fascinating insight into the challenges of the cider industry in Australia, as the divide between the low-grade mass-produced cider and the high-quality craft cider grows. Ultimately, both Drew and his Kiwi compatriots – Old Mout Cider – are positive that the industry will survive the inevitable tax changes and may even be better off for it as the cheaper ciders fall out of the market.

All in all it was a packed day with plenty of information and debate about different aspects of the industry to engage the speakers and the audience. We would like to thank all of our sponsors and associate sponsors from the day and look forward to seeing everyone next year for an even bigger event.