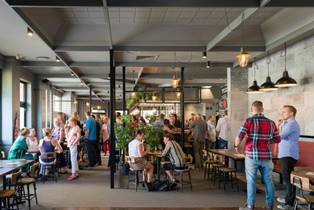 Beer DeLuxe, famous for its Federation Square and Hawthorn sites in Melbourne, has opened a third venue in Albury, NSW,with plans for further expansion up the east coast.

The company behind Beer DeLuxe, Armada Hospitality Group, reinvented one of its existing venues, an Irish pub called Paddy’s, transforming it into a craft beer mecca for regional NSW.

“The offer is dramatically tailored for the regional market in which it operates but the popular mainstream brands still make up a large percentage of our sales, hence they are represented well in the taps as well as pack products,” said Craig Shearer, director of operations at Armada Hospitality.

There are around 20 beers on tap, with probably a 50/50 mix between craft and mainstream, as well as more than 100 bottled beers sourced through the buying team at Federation Square to give some interesting choices to the Albury market.

“Albury is a great town – we have operated there for eight years now and know the region well. The Albury market is still very passionate about their old favourites in Carlton Draught and Dry, and we support people drinking whatever makes them happy,” Shearer said.

“At the end of the day, for us, drinking beer is all about fun and enjoyment. We are however giving them some choices, and trying to open people’s ideas to a whole new world of beer out there.”

Not wanting to rest on its laurels, Armada Hospitality has plans in council to construct a large outdoor beergarden and new venue in Wagga, which it hopes to open in the first six months of 2015.

“Our aim is to continue up the east coast with sites earmarked for Sydney and Brisbane, hopefully in 2015, then further expansion into Canberra and Perth in 2016,” said Shearer.

“We are extremely keen to grow our brand across Australia, however mindful of ensuring each site is unique and different and has something to offer.”