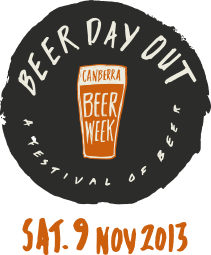 For a single glorious week Canberra is set to be the beer capital of Australia as Canberra Beer Week rolls into town this November.

The event will see the best brewers and breweries from Australia and around the world descend on the nation’s capitol for a range of beer related
events like tap takeovers, beer dinners, beer trivia
nights, meet-the-brewer events, beer discovery tours, Canberra Beer
Pong Championships and more.

With new events being added all the time, the official Event Calendar will be filling up with loads to do, so the organisers are encouraging everyone to check back regularly.

The week will kick off with the
Beer
Day Out 2013 on Saturday 9 October (Thoroughbred Park (Canberra Race Track)
2pm-9pm). The event will feature craft breweries from Australia and around the
world – includingItaly, England, New Zealand, South Africa,
United States and Germany, Canberra’s top restaurants doing street food stalls, and buses running to and from the city.

The day will include prizes and draws and all things beer:

Minors (under 18 years of age) will be admitted free of charge when
accompanied by an adult and there will be activities for the kids including
bungy trampolines, Velcro jumping walls and various performers
providing entertainment all afternoon. These rides will attract a small
cost on the day.

Tickets are available from Moshtix