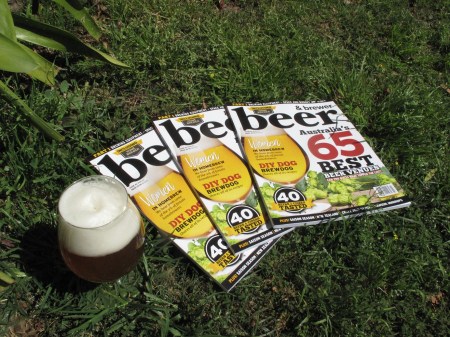 The latest issue of Beer & Brewer is now on sale with some exciting features to soak up while enjoying a beer… or two.

This is our biggest issue for the year and it is jam packed with exciting features including our annual lists of Australia’s Top 50 Beer Venues (metro), Top 15 Beer Venues (regional) and Top 50 Brewpubs. These lists are compiled with the help of industry experts from around the country – thanks to all who were involved.

Spring has officially sprung, so in this issue we are all about saison! Originally created as a low-alcohol thirst-quencher for farm workers, saison has been reinvented and is enjoying a resurgence among craft brewers – despite being notoriously finicky to brew, as Jeremy Sambrooks.

Also, on the topic of saison, Homebrew Editor Chris Thomas has some great saison homebrew recipes for you to try.

Have you ever enjoyed a BrewDog beer and wondered how difficult it would be to replicate it? Then you’re in luck. The team at BrewDog love hops but they also love sharing and that’s why they shared every recipe they have ever made and we’ve got a few of them for you.

Also in this issue, Luke Robertson from Ale of a Time has the final instalment of his three part series on How to Open a Brewery, and we have the first part of his next series on Brewing Equipment.

And as the weather is heating up it is obviously time to get outdoors and fire up the barbie, so in this issue we’ve got some great ribs recipes from Adam Roberts’ book RIBS.