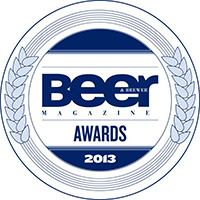 A packed crowd gathered at The Sebel Surry Hills last night to celebrate the winners of the 2013 Beer & Brewer Awards.

Again taking out the honours in the People’s Choice section, the Australian Brewery took out Best Beer and Best Venue.

In the Beer & Brewer Awards section, Redoak owner David Hollyoak took home a well-deserved Brewer of the Year gong after his stellar performance on the international brewing awards circuit this year.

Young Brewer of the Year went to Jody Thomas, a hard-working member of the Lion team who was pretty chuffed to have all her good work recognised.

Feral again took out Best Beer with perennial favourite Hop Hog – narrowly defeating Stone & Wood’s Pacific Ale – as well as taking out the new Craft Brewing Company of the Year category thanks to their consistent string of award wins and high sales figures in 2013.

Like every year, the Beertender of the Year trophy was hotly contested with beer experts from right across the country entering the running. This year Matt Marinich from The Quarie in WA took out the top honour, a well-deserved win after several highly commended awards in previous years.

The big award on the night – Best Beer Venue – went to the consistently amazing The Local Taphouse for the venues’ dedication to great beer, good food and program of beer events.

Congratulations to all our deserving winners across all the categories!