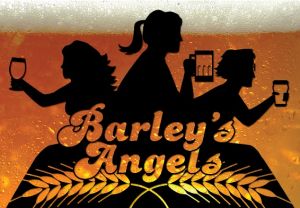 Angels Are Drinking It for Themselves

Barley’s Angels: The Primary Mission
From Australia to the UK, Canada to the USA and even as far afield as Argentina, some of the world’s leading beer experts have decided it’s time to encourage women all over the globe to enjoy incredible brews.

These acclaimed evangelists will be unmasking the unjust myths that hold their fellow females back from the truth of craft beer, helping them to joyfully discover the unique and diverse flavours found in these artisan products, whilst beating down the doors of beer prejudice wherever they find them.

Lisa Morrison, Oregon Chapter Archangel explains, “The point about Barley’s Angels is to ensure that women have a welcoming and friendly environment in which to learn more about the world’s greatest beers and chart their own course of discovery.”

Melissa Cole, London Chapter Archangel added, “There’s so much fabulous flavour to experience, so many great food matches to enjoy and new friends to find in the craft beer world that it would be a crime for women to miss out.”

Mission Make It-Possible The second part of the Barley’s Angels™ mission is to raise funds for the Pink Boots Society, an international trade association of women beer professionals, dedicated to furthering women’s careers in beer brewing and the beer industry through scholarships and support networks.

Teri Fahrendorf, President of Pink Boots Society® stated, “Women attending their first Barley’s Angels chapter meeting will enjoy an environment connecting beer, food, beer history, and women’s role in it. They’ll have the opportunity to make connections through Barley’s Angels worldwide communities when travelling, and will enjoy the camaraderie of new female friends over a pint of fine beer.”

She continued, “I believe that women are developing our own beer culture that is strongly related to communication and community. Women’s beer appreciation perhaps has less to do with alcohol and bittering rates, and more to do with balance, flavour, and a growing knowledge of women’s historical role as the first beer brewers.”

Lisa Morrison, Director of the Barley’s Angels™ program added, “Ladies, it’s time we got our malty mojo back.”