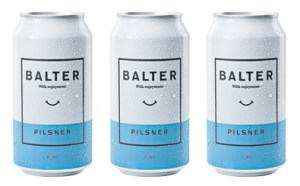 Balter Brewing started work on the beer five months ago, and while a clean tasting Pilsner can often appear simple, Balter’s Head Brewer Scott Hargrave said that a good, traditional Pilsner is a difficult beer to pull off.

“Pilsners are technically challenging,” Hargrave said. “It comes down to great ingredients and process, because every part of making a Pilsner has to be as good as you can do it. You can’t hide behind massive hop flavour or malt structure in a beer like this. It’s a beer that has to stand alone because it’s good – plain and simple.”

The decision to brew a Pilsner came after Balter Brewing received a lot of feedback and requests from consumers for a ‘beer beer’.

Hargrave added: “In the gold rush of hop driven ales Pilsner is a beer that hasn’t been celebrated as much as other styles. But it’s beers like these that are the reason people love beer. It’s a beer we love ourselves, and something we wanted to celebrate.”

The new Pilsner will be available from 1 February and for those interested in how the beer tastes, this is what the team at Balter have to say:

“The word ‘crisp’ gets thrown around when it comes to Pilsners, but that makes us think of lettuce. This Pils is more than crisp, it’s straight up satisfying. The balanced malt base pulls you in for a hug before the hops get frisky with floral aromas and a refreshingly bitter finish. Perfect for those who like a ‘beer beer’, it’s best enjoyed straight from the esky with the bar-b blazing.”