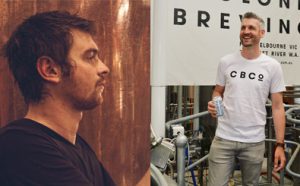 Colonial Brewing Company has appointed Ash Hazell as its new Head of Brewing, who brings with him 10 years of experience in the world of beer.

Hazell began his career at Little Creatures as a Cellar Hand before being approached by Barrow Boys, which was a new brewing venture.

He spent his next few years launching and running the startup contract brewing company and gaining wider experience in the industry. A trip to the US to attend the Great American Beer Festival gave Hazell new ideas and motivation to get back into full-time brewing – it was this decision that brought him to the growing team at Colonial Brewing Company.

Hazell said that Colonial appealed to him for many reasons, including it’s equipment and space to grow.

“I haven’t seen a better canning line in another Australian brewery and you really do need the right gear to make consistent beer. There’s been some great innovations from Colonial as well, like the unique can design. I love the focus on hospitality because letting people into the brewery is a great way to educate around what real beer is. There also seems to be a really passionate culture amongst the Colonial team, which is a sure sign that it’s a great company to be part of,” said Hazell.

Colonial has also appointed Ryan Hobbs to head up the team at the Margaret River brewery.

Hobbs began his brewing career by offering up his hands for free to get his head around brewery work. Following this he worked his way up the ladder until he was crowned Head Brewer at only 23-years-old. After completing his Diploma of Brewing at the Siebel Institute of Technology in Chicago, Hobbs began his training in Munich to become a Master Brewer.

Learning both traditional and modern brewing techniques throughout Europe, Hobbs became the first Australian to ever complete the Master Brewing qualification through Siebel, Doemans and the World Brewing Association.