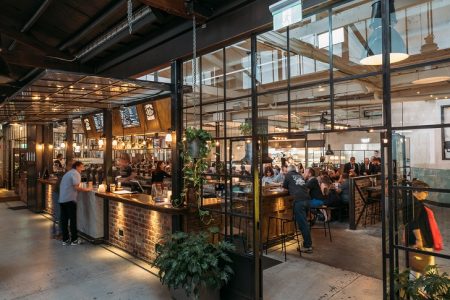 The winner of the second annual Beer & Brewer Top 50 Brewpubs for 2017 is Stomping Ground in Collingwood, Victoria.

Having been open for just over 12 months, Stomping Ground managed to skyrocket its way to the top of the 2017 list. And that really shouldn’t come as any huge surprise given the pedigree of its founders Guy Greenstone and Steve Jeffares, the team behind the GABS festival and both of The Local Taphouses (which both also made it onto the Top 65 Beer Venues list).

When asked what he thought set Stomping Ground apart from other brewpubs around the country, Greenstone said he hopes that it’s a combination of everything.

“I hope it’s about the overall experience, which is something that’s really important to us. So a combination of great beer but really friendly, knowledgeable staff who really are passionate about what we do and live and breathe our beer as well as our brand. And then of course the look and feel of the place and making it nice and warm and welcoming, and a place that is really inclusive rather than exclusive.”

Greenstone continued: “Having been to quite a number of the other venues, we’re mates with most of them, so to be in the conversation with all of those top quality brewpubs is really an honour.”

We decided to launch the Beer & Brewer Top 50 Brewpubs in 2016, which joined our Top 50 Metro Beer Venues and Top 15 Regional Beer Venues lists, as there are now so many breweries with their own impressive bar and food offerings onsite, we felt they deserved to be recognised too.

The list was compiled with the help of 25 industry experts, including the likes of Ian Kingham, Matt Kirkegaard, Kirrily Waldhorn and Tim Charody, aka The Beer Pilgrim. Each expert voted for their five favourite brewpubs, with the scoring weighted so those at the top of the panellists’ lists scored higher than those at the bottom. There were no strict criteria, judges voted based on a range of factors such as the quality of beers, service, staff knowledge, and venue atmosphere.

The complete list of the top 50 brewpubs, together with judges’ comments, can be found in the Spring Issue of Beer & Brewer, which is on sale now in newsagents, liquor stores and home brewer shops. You can subscribe to Beer & Brewer here.