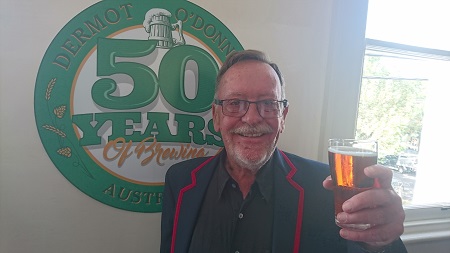 Asahi Premium Beverages has celebrated 50 years of service by Master Brewer, Dermot O’Donnell to the beer industry at an event in Melbourne yesterday.

O’Donnell joined Asahi in 2013, after two stints of 15 years at Tooheys and Carlton United Breweries (CUB), and was responsible for the award winning Keepers Lager which won a Gold Medal at the Australian International Beer Awards last year.

During his time at Tooheys, O’Donnell worked launched Australia’s first low-carb beer, Tooheys Dry in 1989 and the low alcohol Tooheys Blue in 1991.

At CUB, O’Donnell developed a number of beers including Foster’s Special Bitter, Carlton Mid, Cascade and Pure Blonde. He also launched Carlton Cold and Fosters Light Ice in 1994 with both beers becoming the second biggest sellers in the market at the time.

Before becoming a brewer, O’Donnell started as a 21-year-old in a chocolate factory as a quality manager before joining Courage Breweries in 1967 working in beer analysis. He transferred to the Melbourne operations of Courage to assist in the new brewery in Victoria before working with Bass Charrington in the UK on Bass Ale and Carling Black Label from 1970-1975.

“On behalf of Asahi Premium Beverages and Cricketers Arms Beer we want to congratulate Dermot on an amazing innings as a Master Brewer,” said Asahi chief commercial officer, Scott Hadley at the event held at the Builders Arms Hotel in Fitzroy this afternoon, with over 60 people in attendance including a number of former colleagues from the brewing industry in Australia. 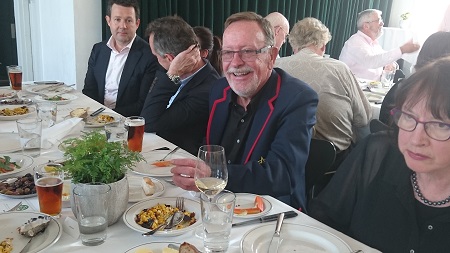 “I am exceedingly fortunate to have worked in such a vibrant industry as brewing for 50 years – it truly is a fraternity of like-minded highly professional people. It just shows that beer drinkers live longer,” O’Donnell said.

Since joining Asahi, O’Donnell has created a number of beers under the Cricketers Arms range, including the renowned Spearhead Pale Ale, Journeyman and Captain’s IPA. He also developed a special brew for the first day and night test in Adelaide called Nightwatchman, and most recently created a Summer Ale with Galaxy aroma hops called Scorcher.

For the 50 year celebration lunch, O’Donnell brewed a special beer and called it Golden Jubilee – a strong Golden Lager with 6.2 ABV which incorporates many of the features of beers he has brewed over the years.