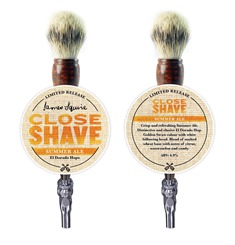 Created by the team of brewers at Malt Shovel Brewery, James Squire Close Shave Summer Ale is a crisp, refreshing brew that showcases the distinctive and elusive El Dorado hop, secured for the brew in the nick of time.

“We managed to secure some El Dorado hops a few days before picking the brew for this limited release. It was definitely a close call with our deadline, but we couldn’t say no to the opportunity to brew a beer made from this rare variety of hops,” said Malt Shovel head brewer, Chris Sheehan.

At 4.9% ABV, Close Shave Summer Ale is a golden straw colour with a white, billowy head. The El-Dorado hop is dual-purpose, and has been used both throughout the brewing process, as well as added after the wort has been cooled for maximum aroma, otherwise known as ‘dry-hopping’.

“With summer on its way, Close Shave Summer Ale is a very refreshing beer for a summer’s day. The best part is that it keeps your taste buds alive and you can still enjoy the delicious meals and fantastic hospitality that the Brewhouses offer,” said Sheehan.