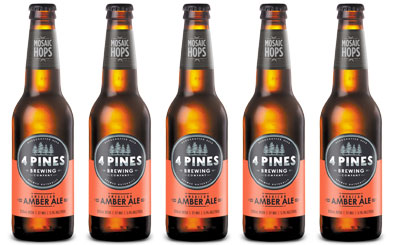 4 Pines Brewing Company has launched American Amber Ale as a permanent addition to its line-up.

Back in 2013, the American Amber Ale started off as an experimentation and love affair of the Mosaic Hop. Then known as the Autumn Amber Ale, it was brewed for the 4 Pines Brew Pub cask ale hand pull tap. The hand pull taop uses a custom built real ale cellar system, replicating that of an English real ale cellar in both storage menthod and temperature, and quickly became a favourite among both brewers and locals.

This led to it being the first bottled Kellar Door Small Batch release in 2014, under the new name of Amber Mosaic.

After a third and final name change and picking up Champion Amber Ale at the 2015 Craft Beer Awards, American Amber Ale has become the seventh permanently available beer in the 4 Pines line-up.

Ruby in colour with rich copper hues, the American Amber Ale’s hop-driven aromas of currant and pear are rounded on the palate with toasted malt character, light fruitiness and a balanced bitter finish.

American Amber Ale is available now in keg and the 330ml bottle release will be available early this month from leading pubs and bottleshops nationally.