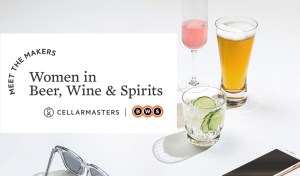 By Charlie Whitting and Andy Young, The Shout

Cellarmasters and BWS have joined forces to celebrate International Women’s Day with Australia’s first drinks festival that will have an all-female line-up.

The inaugural Meet the Makers: Women in Beer, Wine & Spirits will take place in on Friday 8 March, International Women’s Day with further sessions taking place on Saturday 9 March. The festival, which will be held at Australian Technology Park in Sydney, will give attendees the opportunity to meet some of Australia and New Zealand’s finest female brewers, winemakers and distillers.

“We want to shine a well-deserved spotlight on women in winemaking, distilling and brewing, which are traditionally male dominated industries. But thanks to these trailblazing women, this is now changing,” said Christine Ricketts, cellar director at Cellarmasters.

While there are no official stats for the number of female brewers in Australia, the Australian Distillers Association says that women make up around 15 per cent of distillers in the industry. And while it is estimated that the number of women employed in wine making is 38 per cent, when it comes to leadership and senior roles, female representation is thought to be 10 per cent or less.

“Although the industry is changing, there’s still a long way to go. This event is all about celebrating women in beer, wine and spirits and giving customers an opportunity to meet these incredible women and try their products,” said Vanessa Rowed, BWS head of marketing.

Up to 30 brewers, winemakers and distillers will be serving samples during the festival.

Jayne Lewis and Danielle Allen from Two Birds Brewing and Jaz Wearin from Modus Operandi will be among the brewers at the event, alongside winemakers including Sarah Pidgeon from Wynns Coonawarra and Elena Brooks from Dandelion, and distillers like Laura Carter from Applewood Distillery.

Tickets range from $50 to $60 per session, and include complimentary tastings from all producers, a branded glass to keep, a booklet and entertainment. Masterclasses will also be available at an additional cost.