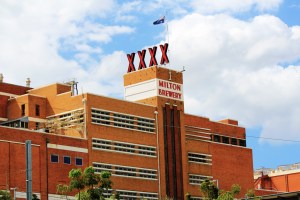 Lion has issued a statement, which has detailed proposed changes within its brewery network and outlined possible redundancies at its West End and Milton breweries.

The proposals have come as the brewery highlights the continued decline in the mainstream beer market, a range of cost pressures and a reduction in volume within its brewery network.

“We acknowledge that we are in the midst of negotiations towards a new Enterprise Agreement at Milton, however these proposed changes are separate to those negotiations, and reflect external market conditions.

“While XXXX is the best performing mainstream beer brand in Australia over recent years, and XXXX Gold remains the most popular beer brand in both Queensland and Australia, in today’s market, no brewery is immune from the need to be competitive.

“Likewise, West End remains South Australia’s most popular beer, and will continue to be brewed locally. West End will continue to play an important role in our network of nine breweries, after we invested significantly in 2013 to build a dedicated cider-making facility at the site.

“Anyone that may be impacted will have extensive access to outplacement, job transition or retirement planning, to be made available on top of the potential redundancy packages.”

While Lion has enjoyed success with its Iron Jack, Furphy and James Squire the traditional mainstream beer market remains challenging for both Lion and CUB. The 2018 IRI-ALSA State of the Industry Report stated that in 2017 while XXXX, VB, Crown, Carlton, Boags and Tooheys collectively accounted for 42 per cent of the beer category’s value, the brands had shed $175m in revenue.

Lion added that while the XXXX trademark and XXXX Gold in particular have outperformed the classic mainstream beer category for each of the last five years both nationally and in Queensland, with people continuing to increase the number of different beers in their repertoire, the classic category as a whole has been under pressure.