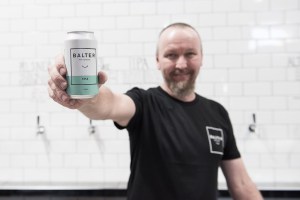 With GABS Festival about to start, let’s look at our Autumn issue’s A Pint With… where we sat down with Balter head brewer Scott Hargrave to chat about his win in last year’s GABS Hottest 100, the story behind his much-loved XPA, and the state of the beer scene on the Gold Coast.

Yeah, absolutely. We had no forewarning, and I didn’t assume anything, but a lot of people kind of expected that we’d do fairly well. I kept saying during the radio broadcast, “Hang on, we might’ve come 101st, so don’t go off too early!” As it turned out though we were really, really stoked to get the result and it was awesome because we got to share that with a whole bunch of people that we wouldn’t normally get to – it all happened live with a big chunk of the Balter family there in the brewery with us, plus a couple of hundred fans, so it was just great, a ripper.

Q HOW DO YOU RANK SOMETHING LIKE THE GABS POLL AGAINST MORE OFFICIAL AWARDS LIKE THE AIBA?

We’ve won championship trophies for the XPA through professional, peer-based blind judging and then also a popular vote from the folks who I suppose really matter; they’re the people who drink the beer and are the reason you’ve got a job. The vast majority of the public may not give two hoots about beer awards really, but if they’re actually voting and they’re spending their hard earned money on our beer, that’s the tick of approval I guess. That’s also the awesome thing about XPA: it’s done very well at both ends of that spectrum.

Q WHAT’S THE STORY BEHIND THE XPA?

When I first got involved with Balter, the founders basically said: “Mate, have you got a first beer in mind?” And I just said “Yeah, this one here – try it!” So I already had the beer, it was just looking for a home. I’d been chipping away for 12-18 months, looking for the particular sort of beer that was maybe an updated take on where beer was [at that time], and where I felt it could be. I just wanted to create a beer that was interesting but drinkable – people could get into the hops if they chose, and just take their time and let those layers of hops flash off in the beer as it warmed slightly, or take it as a thirst quenching, refreshing beer without having to think too much about it. It kind of straddles both camps.

We always wanted the second half of the beer to be just as good as the first half too, that in the glass or tinnie it was good to the last drop, and I think we’re getting there!

Q HOW DO YOU DEFINE XPA AS A STYLE?

I’ve always said about ours that the ‘X’ stands for ‘eXtra pale’. It wasn’t about huge alcohol or about being hopped to astringency, it was about the fact that I wanted a beer that didn’t have the classic American pale ale attributes. I’ve heard people describe our XPA as a ‘tropical session IPA’, and I can’t even really argue too much with that because in a sense that’s exactly what it is. I’ll never claim to have invented the term [XPA] – there were a couple out before I had this one – but we kind of made it a thing, in a way.

Q WHY DO YOU THINK THE BEER SCENE IS SO STRONG UP THERE IN NORTHERN NSW/ON THE GOLD COAST?

It was probably time for something to happen. I know when I was first playing around with the beer that became XPA on my setup at home, I had a very firm idea that I wanted it to be a beer for this region. I thought “Where would be the best place for it to take off?” I watched Brisbane take off back in the day when I first started at Stone & Wood and saw how rich and vibrant that scene up there is now, and it just seemed like it would be time for the Gold Coast to step up as well. When we actually started building the brewery here, we started to get a couple of good coffee shops into our area, then some better restaurants, bakeries – it was almost like the beer got dragged into that as well. When the coffee takes off, the food follows, and you then start to think about things like beer too.

Q WHAT’S ON THE NEAR HORIZON FOR BALTER?

We’ll have a seasonal beer out in the next couple of months – it’s another big beer in 500ml cans. We’ve also got an addition to our full-time range that will be coming out a bit later on in the year; there might even be a couple of those, so we’ve got a bit to do! I’m always playing around on the pilot and we’ll be introducing a couple of new beers, but I can’t really give too much more away.

Q WHAT’S IN YOUR DREAM SIX-PACK?

They’d all be very fresh beers. A Weihenstephaner Vitus, at least one Pliny the Elder, probably an Alesmith IPA as well. Then a Firestone Walker Nitro Merlin Milk Stout… and no idea about the last couple, there’s just too many to choose from!