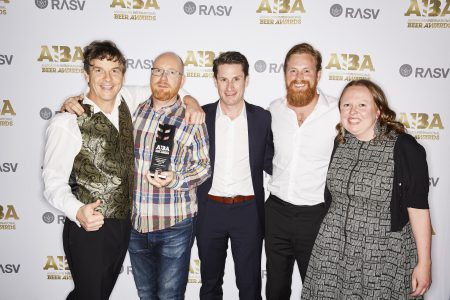 The White Rabbit team with their award.

The results of the 2017 Australian International Beer Awards (AIBA) were announced on Friday in Melbourne, with Victorian brewery White Rabbit taking out Champion Australian Beer for their White Rabbit White Ale (draught).

Another big winner was California-based brewery Firestone Walker, who won Champion International Beer for their Feral One (packaged) – with which they also won Best Belgian/French Ale – as well as Best Pilsner for their Pivo Pils (packaged).

The Australian Gypsy Brewer Award was presented to ACT brewers Pact Beer Co., who only began production in 2015.

In the trophies for the nineteen beer style categories, six were awarded to international breweries, six to Victorian breweries, five to New South Wales, two to Queensland and one to Western Australia.

The AIBA is the largest annual beer competition in the world judging both draught and packaged beer, and celebrated 25 years this year – attracting a record number of entrants, with 1890 beers entered across the various categories.

Close to 200 more entries were also received in the design and media categories.

“As always the standard of beer entered was exceptional with the gold medal and trophy winning beers representing the absolute pinnacle of beer quality from around the globe,” said Varis.

The Awards are conducted by the Royal Agricultural Society of Victoria, and were presented at a gala dinner in front of 700 people as part of Good Beer Week.