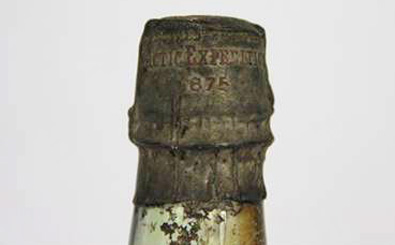 The bottle of Allsopp’s Arctic Ale was discovered in a box in a garage in Gobowen, Shropshire, England earlier this year.

Originally brewed in Burton-upon-Trent, Staffordshire in England, the beer was commissioned to accompany an expedition to the North Pole led by Welsh naval officer Sir George Nares in 1875.

Nares and his crew travelled via a waterway between Greenland and Ellesmere Island, now known as the Nares Straight, succeeded in mapping the coast lines however failed to reach the North Pole.

The bottle was expected to fetch around £600 at the auction at Trevanion & Dean but it surpassed expectations selling for more than five times its estimate.

“The internet went bonkers when the item came up. There were three bidders in the room and there were people on the telephone too,” said Aaron Dean, a partner at the auctioneers.

“It was a great historical object. We have all seen empty bottles from the 19th Century but this bottle went all the way to the Arctic Circle and came all the way back.

“How many more of those will we see? Not many. There are many collectors when it comes to exploration and this fitted into that. It was historically fun.”

The winning offer came from a telephone bidder in Scotland.